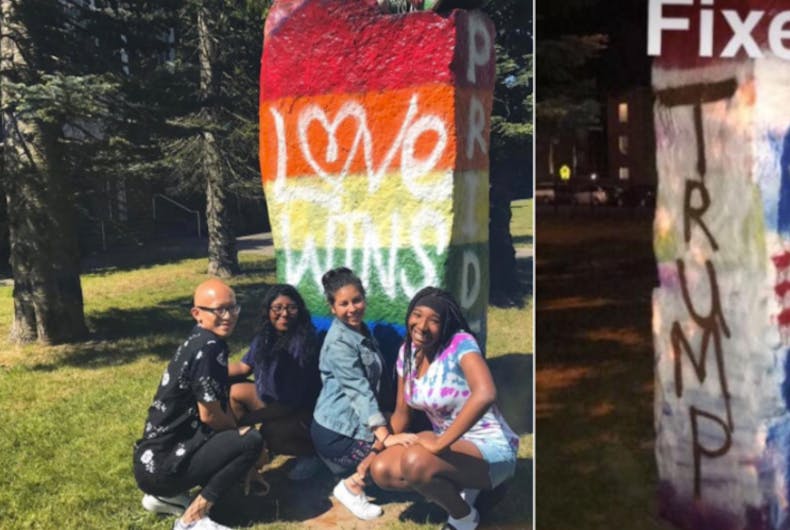 Every year, the graduating class at Highline High School paints a message on the school’s “spirit rock.” This year, students painted a bold rainbow with the messages “Pride” and “love wins.”

But their message of love and acceptance didn’t last for long. A few days later, the rock had been painted over with a pro-Trump message.

The stunt has left students shocked and angry about what they say is a homophobic attack at a school that’s seen its share of racist graffiti as well.

Welcome to Highline Highschool: (PT2) Not ONLY is this place not safe for students of color but the LGBTQ community as well. pic.twitter.com/2eAtz5gVjB

Student Jahmara Coleman posted a screenshot allegedly taken from a Snapchat in which the two rocks are shown side by side, with the caption “Fixed it” over the repainting. Coleman has been outspoken about the issue, helping organize a walkout in protest last Friday and getting kicked out of a school assembly after she loudly protested homophobia.

“Nothing can be done about what they did to the rock, but that doesn’t mean we can’t celebrate unity and pride!” Coleman shouted into a megaphone during the walkout.

what’s been going on all year long with is COMPLETELY wrong and unfair on countless levels. thank you to everyone who participated in the walk out today and thank you for supporting me while i “crashed” our assembly. i appreciate every last one of y’all ‼️ (shoutout lalia)

“What’s been going on all year long with is COMPLETELY wrong and unfair on countless levels,” Coleman wrote in an Instagram post. “Thank you to everyone who participated in the walk out today and thank you for supporting me while I ‘crashed’ our assembly. I appreciate every last one of y’all.”

Last month, Coleman called out racism on campus, sharing a photo of “White Power” graffiti alongside a swastika.

I would really appreciate it if everyone would share this! The racism at Highline has to stop. By the way the picture on the left says "white power." What a great day to be a pirate

School officials sent a letter to parents addressing the incident and vowing to do more to address intolerance next year.

“I want to assure you that at no point have frustrations escalated to confrontations or violence.  As a precaution, we have had extra security on campus, and we will continue to do everything in our power to keep our students safe at school,” Principal Vicki Fisher said in the email. “Next year, we will focus on learning to better accept and respect each other, regardless of our beliefs, backgrounds, identities, or political opinions. This is critical work for all of us–students, staff and families.”

But Coleman recently shared social media posts that appear to show the students responsible for defacing the rock — who students speculate may have been members of the baseball team — making threats against her, writing “#death to jahmara.”

The school has invited parents to a meeting Thursday to discuss the incident further and what the school is doing about it.

“I think we are open to whatever solutions are out there,” Highline School District spokesperson Catherine Carbone Rogers told Fox Q13. “We know that it’s going to involve training for staff around how to sensitively guide students through issues of freedom of speech and acceptance and tolerance of embracing people who have different opinions.”

This guide to charities is now flagging dozens of hate groups