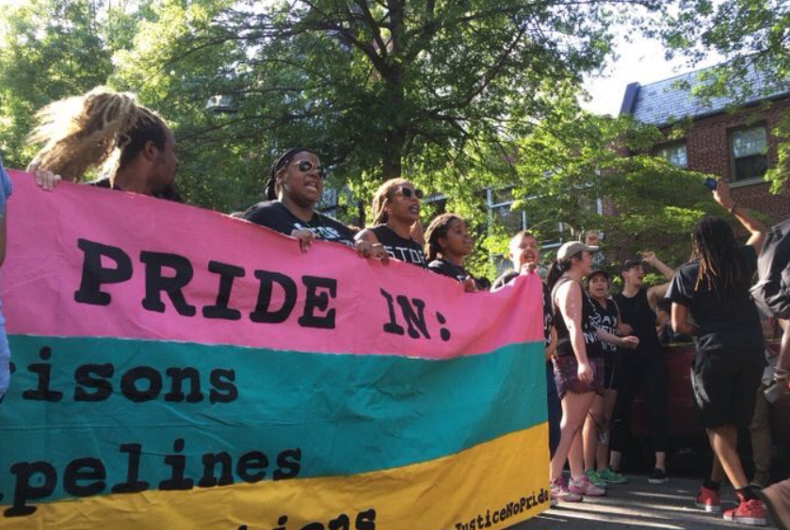 Capital Pride in DC was disrupted multiple times yesterday by protestors from a group called “No Justice No Pride.”

The group’s Facebook page says that they were protesting the corporate presence at pride, the lack of minority representation in Capital Pride’s board, and the participation of weapons dealers and the police in the parade. They demand:

– Unseat and Replace Capital Pride Board with members from historically marginalized communities, Shift power around LGBTQ+ rights from D.C.’s elite to historically marginalized communities, and allow campaigning around critical issues.
– Change the narrative that D.C.’s government and MPD are doing “right” by our communities.
– Create a community of resistance and radicalism around LGBTQ folks.
– Correct the falsehood that Pride would not be possible without corporate sponsorship and branding, and bar from participation all industries that profit from war, detention and incarceration, environmental destruction, evictions, and community displacement.

DC police say they were prepared for this, so they already had an alternative route in mind. “We anticipated this. We knew there would be counterprotests,” Police Chief Peter Newsham told the Washington Post. “We had planned for an alternative route, and that’s what we used.”

The parade was delayed by 90 minutes, and No Justice No Pride ended up marching in the original route planned for the pride parade.

No Justice No Pride says they attempted dialog with Capital Pride‘s directors before the parade but were dismissed.

Participant Angela Peoples said in a statement, “We deserve to celebrate Pride without being forced alongside the Police who kill us.[…] Pride should be a haven for the entire LGBTQ community. The Capital Pride Board has shown who it’s prioritizing. No Justice No Pride is for everyone who has previously been excluded and for a different vision of what this event could and should be.”

The protestors were met with angry reactions from parade participants.

The gentleman in the blue shirt shouted, "Fuck you for ruining a nice parade!" and tried to start his own "No respect, no pride" chant. pic.twitter.com/Ha7qS8LRsC

#NoJusticeNoPride is stupid and ruined Pride. Thanks a bunch you pretentious a$$holes. The headline should have been, "Thousands Came Out" pic.twitter.com/gfcG02dDLM

This isn’t the first time this year that Capital Pride has faced controversy from the LGBTQ left. In April, a Capital Pride executive producer resigned after it was found that he wrote a transphobic blog post for the far-right website Red State.