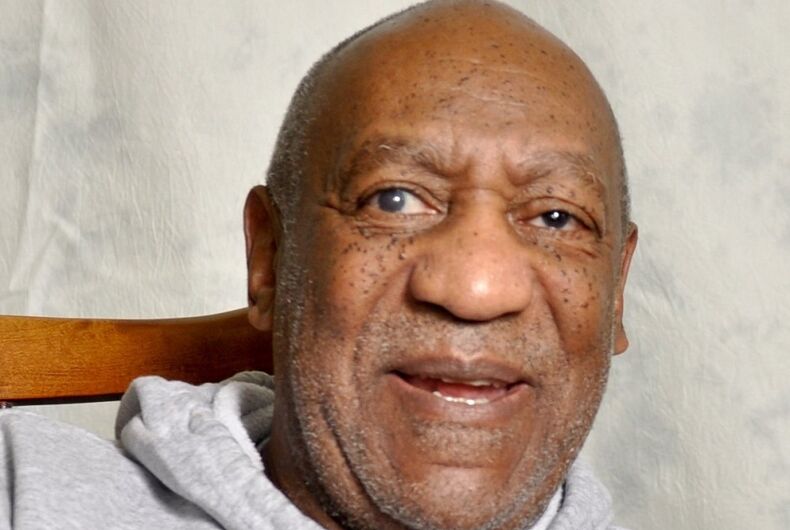 Bill Cosby’s trial for the rape of Andrea Constand is underway and the judge just rejected a request from the defense to reveal the fact that Constand is a lesbian.

Over 40 women have accused Cosby of sexual assault, many of them saying that he drugged and then raped them. Only Constand’s accusation that Cosby gave her a sleeping pill without telling her what it was and then raped her in 2004 has resulted in criminal prosecution.

The defense asked the judge if they could disclose two pieces of information about Constand at the trial. First, they wanted to out her as a lesbian by having a former girlfriend testify in court. Second, they wanted introduce the possibility that Constand had a sexual relationship with “male celebrity athlete.”

The trial takes place in Pennsylvania, where a state rape shield law prevents defense attorneys from bringing up alleged victims’ sexual histories in court, unless there is a direct link between the crime and the information. A victim’s relationships with other people usually has nothing to do with whether or not they were raped by the defendant, but sexual assault convictions can depend on how sympathetic the victim appears so defense attorneys often try to portray them as sluts or otherwise “deserving” of being raped.

Cosby’s lawyers were seeking an exception, arguing that these facts pertain to Constand’s credibility. First, since she didn’t tell Cosby that she’s a lesbian, that shows that she’s untrustworthy, as if anyone who doesn’t out themselves to all of their professional acquaintances is just a pathological liar.

Prosecutor Kevin Steel wrote in his response, “Defendant seems to desire that those with sexual orientation different than his own should readily identify themselves – perhaps with a scarlet letter – at their first encounter with another person.”

It might seem counter-intuitive – Cosby says that he had consensual sex with Constand, so why would he want to out her? – but the point is more to make her seem unsympathetic.

Or maybe they were going to portray her as bisexual. Who knows. Their stated reasoning, though, strains credibility; it’s pretty obvious why a gay woman in 2004 might not want to out herself to everyone she meets.

On the second point about the unidentified “male celebrity athlete,” the defense says that they were hoping to show that Constand has a history of sleeping with famous men just to get money out of them.

“I’m assuming [detectives] tried to see whether or not this was a pattern on her part of chasing celebrities,” a defense lawyer argued.

Steele called this “the age-old tactic of victim shaming.” “There exists absolutely no logical connection between the defendant’s guilt and Ms. Constand’s relationship status, her sexual orientation or her past partners,” Steele argued.

Judge Steven O’Neill issued an order barring the defense from bringing up Constand’s sexual history. The judge did not comment on the decision.

Republican candidate sends out homophobic flyer then lies about it