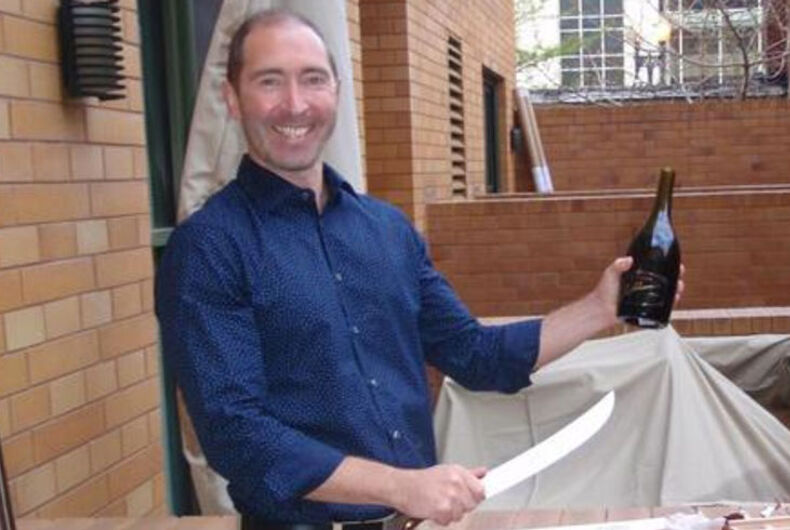 Editor’s Note: One hour after publication of this report, a Capital Pride spokesperson provided a more detailed response to the accusations made against the Washington, D.C.-based organization. Those statements now appear within the content of this updated article, in full.

Capital Pride Alliance has confirmed to LGBTQ Nation that its executive director asked volunteer executive producer Bryan Pruitt to resign Wednesday, following the revelation of a 2016 blog he wrote that was both transphobic and attacked what he called “the gay left.”

The blogpost in Red State, a conservative political site, was published almost a year ago and headlined, “Grabbing Defeat from the Jaws of Victory.” It predicted the fallout that did, in fact, happen when Hillary Clinton lost the presidential election to Donald Trump.

An LGBTQ collective named No Justice No Pride publicized the May 2016 item Tuesday, noting how Pruitt claimed that “true trans people” have no problems using public bathrooms, because they go undetected.

There is not an epidemic of trans people being denied access to public facilities. Trans people safely use bathrooms every day, mostly because if they are truly trans, other folks don’t even notice.

Pruitt did not respond by press time to our request for comment sent via social media.

He emailed a statement regarding Pruitt, which curiously did not condemn his use of the words “truly trans,” and instead claims that expression is “insensitive and offensive to many:”

Bryan Pruitt has been a volunteer with capital Pride for two years and has shown nothing but consideration and respect to everyone. His personal political views are not Capital Pride’s. However, Bryan resigned from his volunteer position because an article he wrote has a statement that is insensitive and offensive to many and he does not want to take the focus away from Pride. Capital Pride believes that we learn by coming together, and will take this opportunity to invite the community to take part in events like Capital Trans Pride on the May 20 where we can learn from, and share with each other.

No Justice No Pride called Pruitt’s resignation a “victory for the community” but made clear its organizers are not satisfied, and they issued a news release Thursday, and published it on Medium.

They’re demanding Capital Pride undergo “a wave of change,” alleging that the nonprofit “colluded with the very forces that oppress queer and trans individuals. Their willingness to ignore transphobia, accept money from corporations that profit off of the incarceration of queer and trans people — predominantly queer and trans people of color — and celebrate the Metropolitan Police Department, indicate a fundamental disregard for large swaths of our community.”

The accusations against the MPD are that its officers “harass and arrest women guilty of walking while trans. The same MPD in which officers have repeatedly shot and assaulted trans women of color, and countless Black youth.”

The group is also critical of Capital Pride appointing Wells Fargo executive Jesse Bonales to its board, because of what it sees as collusion between the banking conglomerate and right wing causes.

Capital Pride has historically endorsed and accepted sponsorship from large corporations that directly impact and hurt our communities. Wells Fargo, for example — commonly known for its financial role funding the Dakota Access Pipeline, is a major investor in private prisons and immigrant detention centers — their shares are booming under President Trump. Capital Pride even holds all of their funds in a Wells Fargo account, and has given a spot on their board to Wells Fargo employee Jesse Bonales.

Bonales did not respond to a request for comment sent via social media as of press time. Capital Pride’s statement addressed the accusations, point by point. Strangely, however, the statement below refers to those who’ve launched this public rebuke as “the Queer Resistance,” rather than “No Justice No Pride,” which identifies itself as “a collective formed out of ResistThis!” This is the same group that organized marches and “Queer Dance Parties” outside the homes of Mike Pence and Ivanka Trump, under the banner “Queer Resistance,” which perhaps explains the confusion.

The Capital Pride Alliance was not contacted by the Queer Resistance prior to the distribution of their press release last night. The press release includes many inaccuracies and they are engaging in oppressive tactics that do not align with the very essence of what they claim to seek. Capital Pride is extremely mindful and thoughtful of our role in serving the entire community and growing our events in a way that fosters pride and community.

Regarding their demand for us to drop all corporate sponsorships immediately, it has been with the support and resources of our diverse sponsors and corporate partners that Capital Pride has been able to grow and thrive.

Regarding their demand for us to exclude the police, Pride is an inclusive event and the Capital Pride Alliance supports all members of the LGBTQA community to participate in Capital Pride. We strive to bring people together, foster dialogue, and create an environment of understanding from all perspectives.

Morgan told us at this point his group is moving on, and later referred all questions to a freelance public relations agent, who told LGBTQ Nation she had been hired on Wednesday to represent the organization.

Why did Aaron Hernandez write John 3:16 on his face before committing suicide?