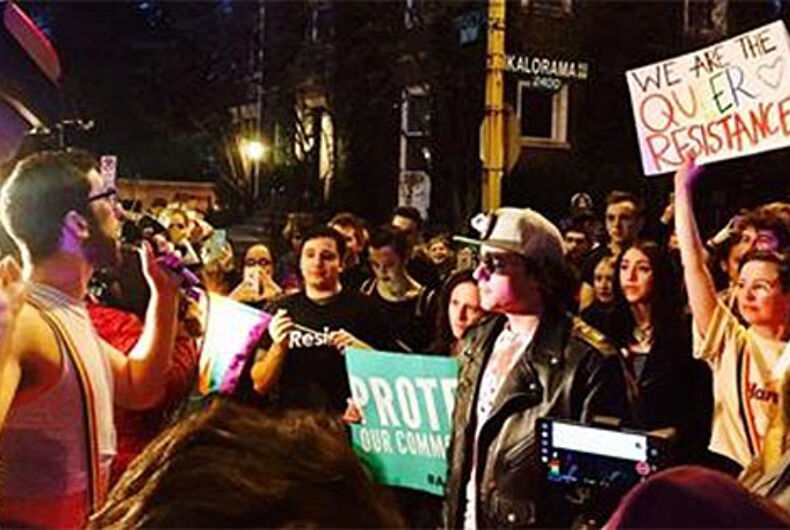 The exclusive Washington, D.C. neighborhood of Kalorama — home to the Obamas, Rex Tillerson and, yes, Ivanka Trump and her husband Jared Kushner — was the scene of the latest dance party protest.

Just three months after crowds got jiggy with it near the home of Vice President Mike Pence, the WERK for Peace group organized Saturday’s march and dance party outside the Kushner’s residence. Ivanka and her hubby reportedly were not at home, having traveled to New York for their youngest son’s birthday, says New York Magazine.

But that didn’t stop the marchers or the dancers (or even matter to those taking part, even if they still called on the president’s daughter to join them):

And let it be known, not everybody dancing was queer. Thank you, allies!

We joined in solidarity with the LGBTQ community for a queer dance party from Dupont Circle to @IvankaTrump’s house. pic.twitter.com/MMQvKYJuAH

Anti-LGBTQ trolls posted complaints on the WERK for Peace group’s Facebook page, accusing participants of  not cleaning up after themselves and for “bullying” the 82-year-old man in the video above. One elderly critic, Lee Cook, spoke for all, however, in posting: “You queer b******s should shit your colors an leave the presidents wife alone. Your shit will make no difference any way it just shows your intelligence.”

(Ivanka is the president’s daughter, for those unaware. But given her high profile with the president and his remarks about her body, we could see how you might get confused.)

But the hit of the party looked as if the night paired perfectly with white wine and a mink coat. New York identified her as Dianne Bruce — who lives across the street from Ivanka and Jared, and watched the whole thing from her front steps while wearing a serene smile.

The neighbor watching the LGBT protest in front of Ivanka Trump's house while drinking white wine is definitely invited to gay brunch. pic.twitter.com/Lum7pwuOsz