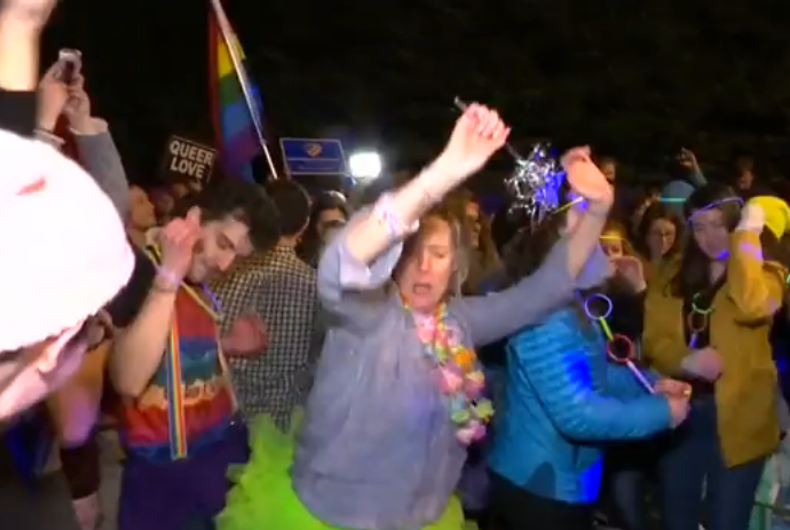 Activists supporting LGBTQ rights made themselves known in the most fabulous fashion on Wednesday night, holding a “queer dance party” outside of Vice President-elect Mike Pence’s rented home in D.C.

About two hundred protesters were involved in the action, organized by the groups WERK and DisruptJ20. Participants dressed in their finest rainbow attire and carried flags and signs making their message of equality clear to the newly elected vice president, who has a decidedly anti-LGBTQ history, including signing a Religious Freedom Restoration Act, which allowed for discrimination. Pence eventually backpedaled after extreme pressure.

As you can see from the video, it looks like one hell of a party.

These are the streets outside Mike Pence's house in D.C., shut down by activists throwing a Queer Dance Party tonight. Pure jubilance. pic.twitter.com/GrJAgvSZBh

Even one of Pence’s neighbors couldn’t resist joining in, reports USA Today.

“We come in all shapes, sizes, colors, beliefs, and we need to respect our diversity,” said Joanna Pratt, who has lived across the street from the house the Pence’s are renting since 1979. “The LGBT community has had a real struggle to be respected and be accepted, and that’s a sad statement on our country and our culture that they’ve had that struggle.”

Pence’s neighbors have been flying rainbow flags on their homes to show him that they believe in a more just and equal America, even if he doesn’t.

While Pence appears to have been away from his house when the protest occurred, having gone out to dinner with his wife and Gov. Scott Walker.

However, according to the event invite on Facebook, they planned to leave behind plenty of biodegradable glitter and rainbow paraphernalia so that their presence would still be felt.

Watch Ellen win the most People’s Choice Awards ever

Will Donald Trump dance with Caitlyn Jenner at inaugural ball?