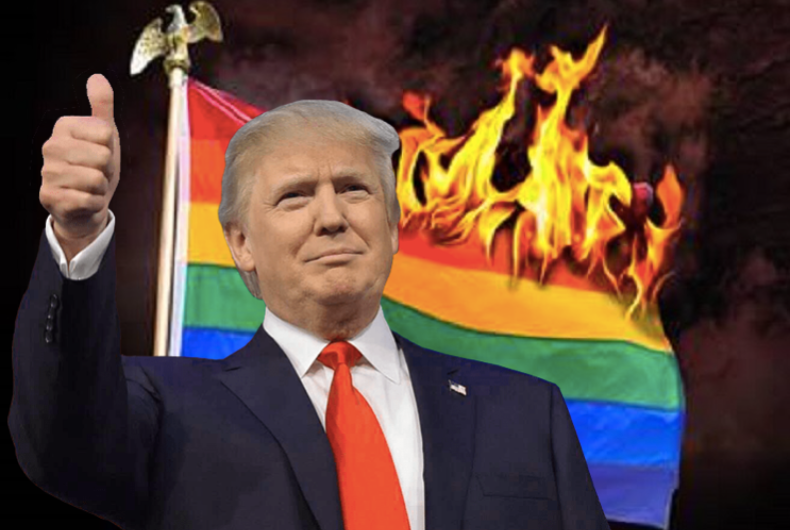 UPDATED: The Department of Commerce is walking back today’s release of an equal employment opportunity statement that excluded LGBT people and says it will reissue a new one that includes sexual orientation and gender identity at Secretary Ross’ direction.

“To be clear, the Department’s EEO policy statement was never intended to change the policy or exclude any protected categories,” a spokesperson told Buzzfeed. “The Department of Commerce policy remains that we do not discriminate on the basis of transgender status and sexual orientation. Department employees will continue to enjoy the fullest extent of the protections of all the non-discrimination laws.”

“You can’t un-ring a bell. By trying to erase LGBTQ people from the Commerce Department’s nondiscrimination policy, the Trump administration sent a crystal clear message to LGBTQ Americans: ‘You’re not welcome here.’,” DNC spokesperson Joel Kasnetz said in a statement emailed to LGBTQNation. “We demand the Trump administration make a commitment to strengthen instead of roll back protections for LGBT Americans.”

Sexual orientation and gender identity protections have been removed from the Department of Commerce’s equal employment opportunity statement. In a statement signed by Secretary Wilber Ross, the department pledges that:

The Department of Commerce does not tolerate behavior, harassment, discrimination or prejudice based on race, color, religion, sex, national origin, age, or disability. We will also provide reasonable accommodations for applicants and employees with disabilities.”

As Buzzfeed points out, sexual orientation and gender identity protections have been included since 2010. Other tweaks were made to the language as well.

While Donald Trump promised to leave Obama-era protections for LGBT government employees in place, he also promised to be BFFs with the queer community. Meanwhile, he keeps promoting “religious freedom” laws that would allow Christians to discriminate against LGBT people, refuses to recognize Pride month, wants to slash funding for HIV/AIDS programs, has appointed one of the most vociferously anti-LGBT cabinets in history, and picked a religious right darling as his vice president.

Some protections remain, however. Finding out what those are and if they apply isn’t always easy though and employees and managers are left confused.

“It is careless bad government,” Mara Keisling, Executive Director of the National Center for Transgender Equality, told BuzzFeed. “Trans employees are still absolutely covered by sex discrimination laws and sex is listed there. So even if the Trump administration doesn’t want to enforce federal civil rights laws we’re not going to let them get away with that. If I were a manager I’d be really afraid that other managers are going to look at this and think that these are not protected people.”

Lesbian nominated to be prime minister of Serbia