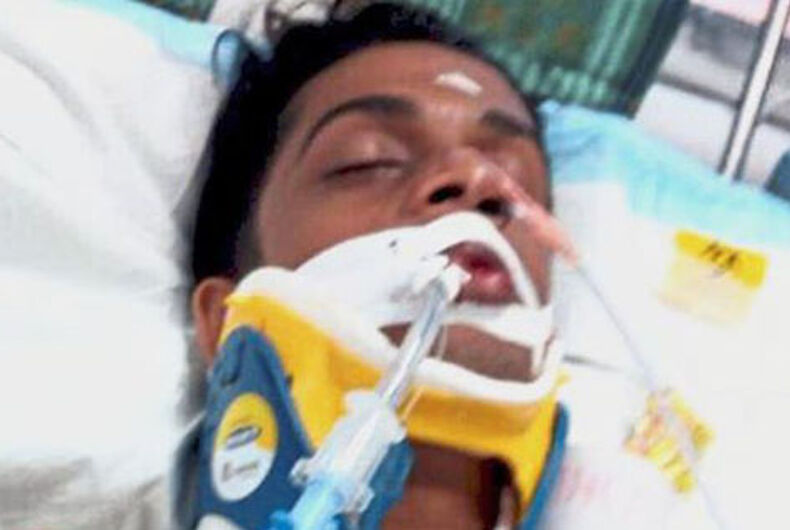 T Nhaveen, 18, may never regain consciousness after a despicable attack by several young men ranging in age from 16 to 18, that left the Malaysian man brain dead.

It happened outside a burger shop Friday, near a mosque in Gelugor, a southern suburb of George Town in Penang, Malaysia. The teen had decided to get together with a friend to celebrate quitting his job and going to Kuala Lumpur for college on Saturday, reported Free Malaysia Today. But he never made it.

Police say Nhaveen and a friend were just outside Taman Tun Sardon Mosque when they ran into two former classmates who had bullied Nhaveen for being effeminate.

Reports say as many six more young people then rode up on motorcycles. All eight men then started beating Nhaveen and his friend Previin using their helmets.

Previin managed to escape and ran away, and headed to the Penang Hospital where he was treated for crushed cheekbones.

Hours later, a brother of one of the attackers brought an unconscious Nhaveen to the E.R. of that same hospital, at 2 a.m. Saturday. There, he was treated for severe head injuries and a wound on his groin that oozed blood.

Gay Star News reported his family was informed he had been sodomized; there was evidence of forced penetration to Nhaveen’s anus. He also suffered severe burn marks on his back.

Doctors declared the student brain dead. At least four of his alleged attackers were college students, police say. The fifth under arrest is unemployed. The three others have not been apprehended.

Nhaveen had hoped to study music composition. “He loves music,” his aunt said. “Nhaveen is so friendly and jovial. I spoke to him last week and he wanted to come over to my place for chicken curry. But looking at the way he is now, I do not know if he will come back at all.”