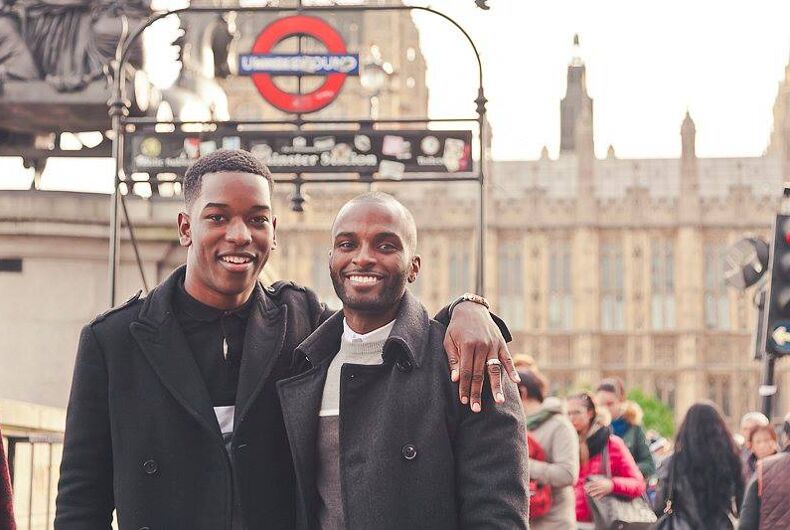 Dominic and Nick shared their beautiful story, and everyone is here for it. Photo: Facebook/Dom and Nick

A gay couple found love early, had it tested by distance and time, and have stayed happily together to tell the tale.

That story is going viral, after the pair, Dominick and Nick, shared it on the popular Instagram account The Way We Met.

As Nick explains, they met as teenagers, going to different, but nearby high schools, and sharing many mutual friends. It was in high school that he says they both came out to their parents, unbeknownst to one another.

“After graduating high school, life took me and Dominic in different directions,” Nick continues. “He went on to attend UCF in Orlando while I went to college in Kentucky. We reconnected one summer when I was in Orlando helping a friend move into her dorm and asked Dominic to have dinner with me.”

He remembers that they talked for hours, until the restaurant shut down for the night. They decided to make it official shortly thereafter.

“And so our long distance relationship began. But the distance wouldn’t be ending anytime soon,” he continues. “After college, I moved to New York for work and Dominic moved to D.C. to go to law school at Georgetown University.”

But after seven years of being apart, they are now both living together in Brooklyn, and are engaged.

While the picture could not be more perfect today, they admit that there were times where they were both less sure of how their lives would turn out.

“Dominic and I feel lucky to have found love at such a young age. However, falling in love with another black man was scary in ways neither of us could have ever imagined,” Nick writes.

“It forced us to face the very real resistance from society for being not only homosexuals but black men as well,” he says. “We had to confront the stereotypes of being largely defined as uneducated, disloyal, untrustworthy, and unreliable individuals. But together we chose to rise above those prejudices and rewrite our own story- one of inspiration.”

“We want others to see that our union is marked by achievement, love, friendship, respect, and unconditional support,” he adds. “We hope to encourage other black and brown men and boys everywhere to be true to who they are. And when they find love in each other’s eyes, to know that their love is just as strong and beautiful as anyone else’s.”

The couple’s story is told alongside a picture of them together at a Pulse memorial event.

“Dominic went to school in Orlando and Pulse was the gay bar where he really came into his own gay identity so the tragedy really hit home for us,” Nick tells Gay Star News.

“It is amazing to see the response touching so many people,” he says. “We’ve been fortunate enough to have both straight and gay couples reach out to us and let us know how touch they are by our love: Which to us reinforces that love can breed more love.”

“As Black and gay men living in America we don’t often see positive representations that speak to both parts of ourselves,” Nick continues. “It’s why we decided to create our account to show others (especially young LGBTQ people of color) that they can live their whole truth and be happy and in love together.”

The pair will be wed in Florida early next month, surrounded by friends and family.

“Both of our families have been very supportive throughout the entire planning process of our wedding and are looking forward to sharing that moment with our closest friends when we say I Do in a few weeks in Miami,” Nick says.

We wish them all the luck and happiness in the world as they continue on their journey together.

This is our 100th post! Thanks for all your love and encouragement over these last few months. We are grateful to share our imperfect love story with you all. Only 30 more days till our wedding day! 7.7.17 💍🤵🏿🌈🤵🏿 #DomandNickGetHitched #pride #lovewins