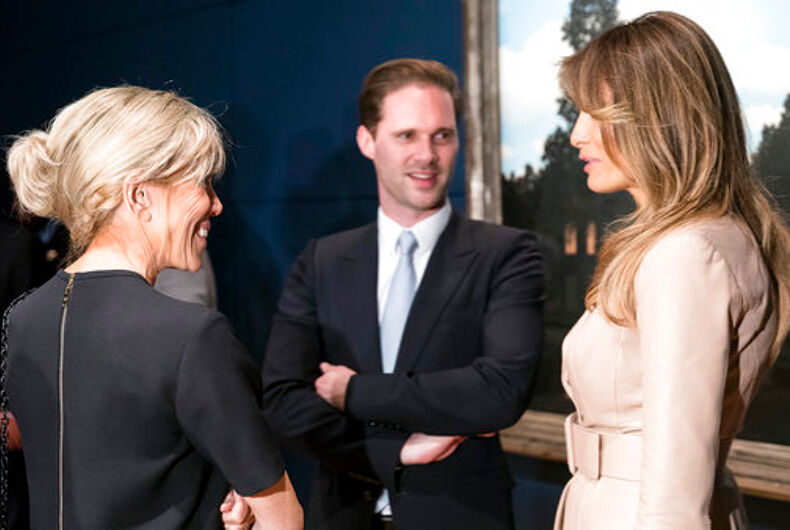 The First Gentleman of Luxembourg joined first ladies and partners of NATO leaders for an outing to a Brussels children’s hospital and museum Thursday while their more political halves met at a nearby summit.

Gauthier Destenay, a Belgian architect and husband of Luxemburg’s Prime Minister Xavier Bettel, mingled with sophisticated spouses including Melania Trump, the first ladies of France and Turkey, and even the Queen of Belgium, as they visited sick children and toured a museum dedicated to Belgian surrealist painter Rene Magritte. Magritte is best known for his painting of a pipe titled “This Is Not a Pipe.”

Destenay married his partner in 2015, two years after Bettel won his historic election and year after the tiny county passed marriage equality. Bettel is the first gay prime minister in Luxembourg and the third in Europe, after Iceland’s Jóhanna Sigurdardóttir and Belgium’s Elio Di Rupo, and the only openly gay world leader currently in power.

And while some of the NATO member nations prohibit same-sex marriage, the visit went off without any noticeable hitches. At the NATO conference, on the other hand, things were less cordial. Donald Trump was filmed appearing to shove Montenegro Prime Minister Dusko Markovic out of the way to be in the front of a photo.

Watch the results come in for Montana’s wild Congressional election