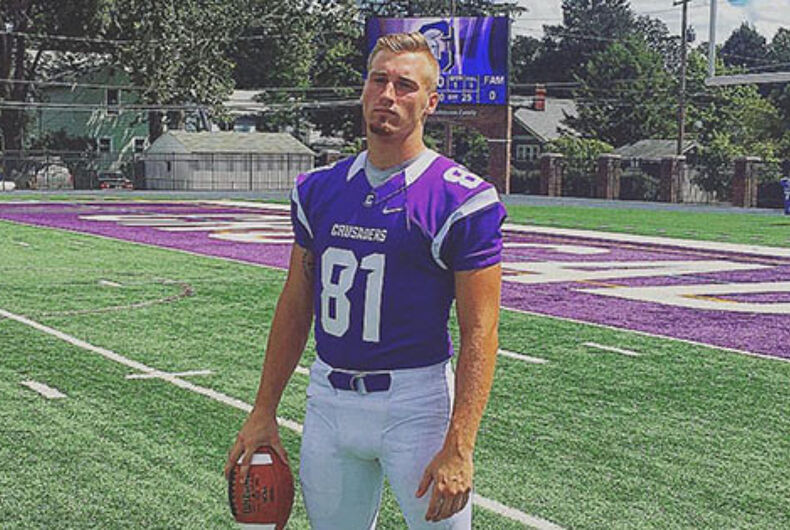 Wyatt Pertuset, a college football player who is already setting records as a punter for Capital University in Ohio, accepted himself as a gay man as early as freshman year of high school, but he didn’t come out the way he planned.

Like many closeted athletes, Pertuset said that fear pushed him deeper into that self-imposed prison. He wrote about it in a gripping and honest op-ed for Outsports.

I was always terrified with the locker room talk that went on about gays and how gross they are and how wrong being gay is. Yes, that talk was there. It just pushed me further into the back of the closet.

I always told myself I would never come out until I was done with high school and football.

Boy was I wrong.

My junior year of high school, right after my season had finished up, I had told only about five people who I truly was. Being in a small school, word traveled fast. Someone I had told had “accidentally” told another person about me being gay. Before long the rumor had stretched out to most, if not all, faculty and students at my school.

The football player was gay.

Once he got past what he described as “single-handedly the most terrifying thought in my head, especially growing up with a family full of farmers who weren’t really exposed to that kind of thing yet,” Pertuset realized: “Why was I lying about who I am just to please everybody else?”

The next day he confirmed the rumors and came out to everyone.

After telling my friends and coaches and family, everyone was so accepting and loving that I just felt foolish for ever hiding who I am.

The people at my school quickly realized that, with one of the captains of the football team being gay, it really doesn’t define you. It’s simply a part of who you are. My teammates took it really well and didn’t treat me the slightest bit differently.

If anything, I got more respect because of it.

He went on to be named both Prom King and Homecoming King, made the honor roll, and student body president at North Union High. Even better, Pertuset was one of the first openly gay athletes to get an All-State Honor for football in the state of Ohio. He was named to the first team All-Conference, First Team All-District and Special Mention All-Ohio in his senior year.

The college freshman found the same acceptance at Capital University in Columbus, although he had feared he’d need to “go straight back into the closet.”

Everyone was so accepting. They treated me like family. I’m so thankful for my teammates at Capital because just by creating that family-type bond, I am able to excel on and off the field during my college career.

Pertuset’s dream for next year is to be one of the first out football players in the NCAA to score a touchdown and receive an All-Conference honor. And he closed his amazing story with advice for other athletes struggling to conceal their sexual orientation.

If you are in the closet and also an athlete and you’re reading this, I want you to know that coming out is not as scary as you make it out to be. It is the most relieving experience you’ll ever come to term with.

You finally get to be yourself and show people that the LGBT community knows how to play ball too.

BREAKING: The NBA just gave the LGBT community a huge smack in the face