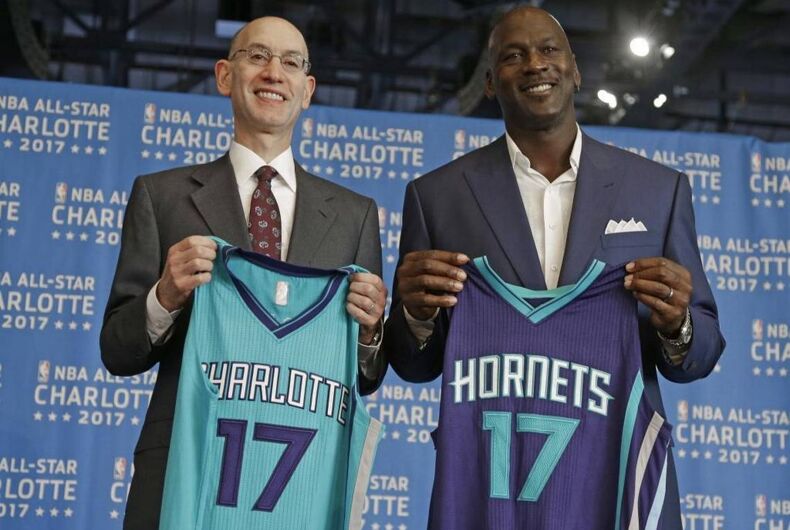 NBA Commissioner Adam Silver, left, and Charlotte Hornets owner Michael Jordan in 2015 on the day Charlotte was announced as the site of the 2017 NBA All-Star game. The NBA pulled the game over an anti-LGBTQ law, and after the "compromise" has awarded the game back to the city in 2019.Photo: Chuck Burton/AP

Charlotte was to host the 2017 All-Star Game, but had it pulled due to House Bill 2 (HB2), a law that nullified non-discrimination ordinances in cities throughout the state, prohibited transgender individuals from using the bathrooms and locker rooms matching their gender identity in government-owned buildings, and capped the state’s minimum wage.

“The most recent change in the law does not mean the fundamental issues are resolved,” Silver said at the time. “But after considering all points of view, we determined that Charlotte will be eligible to host.”

Cooper has also admitted that the compromise leaves some anti-LGBTQ discrimination in place, but recently pledged to sign an executive order protecting LGBTQ people. Those protections would only apply to the departments the governor controls.

Charlotte Hornets Owner Michael Jordan, who supported the NBA’s decision to pull the 2017 All-Star Game, but who lobbied other owners to ensure that the city would be awarded the game again should the politics in the state allow it, celebrated the news.

“We are thrilled the league has awarded NBA All-Star 2019 to the City of Charlotte,” said Jordan. “We want to thank Commissioner Silver for his leadership throughout this process and for the decision to bring NBA All-Star back to Buzz City. All-Star weekend is an international event that will provide a tremendous economic impact to our community while showcasing our city, our franchise and our passionate Hornets fan base to people around the world. We look forward to serving as hosts for NBA All-Star 2019 and welcoming all visitors and guests to our Spectrum Center.”

The NCAA and ACC also ended their boycott with the passage of HB142. Many of the cities and states have kept their boycotts going, however, continuing to ban non-essential, state or city funded travel due to the continued discrimination of LGBTQ people in North Carolina.

“We need to see concrete guidelines and policies put in place that will live up to the proposed principles put forward by the NBA designed to protect all of its players and fans,” said Equality NC Interim Executive Director Matt Hirschy in a statement emailed to LGBTQ Nation. “As we move forward with the NBA All-Star Game returning to Charlotte, LGBTQ people must be invited to the discussions between the NBA, the city of Charlotte and NCGA leadership to provide input and feedback on how to best protect LGBTQ people.”

“North Carolina’s discriminatory law prohibits the city of Charlotte from implementing non-discrimination protections for LGBTQ residents and visitors attending the All-Star Game. Nothing has changed that fact,” said HRC Senior Vice President for Policy and Political Affairs JoDee Winterhof. “It’s critically important that people understand the gravity of this situation, which has had the effect of extending discrimination and endangering LGBTQ people across the state of North Carolina.”