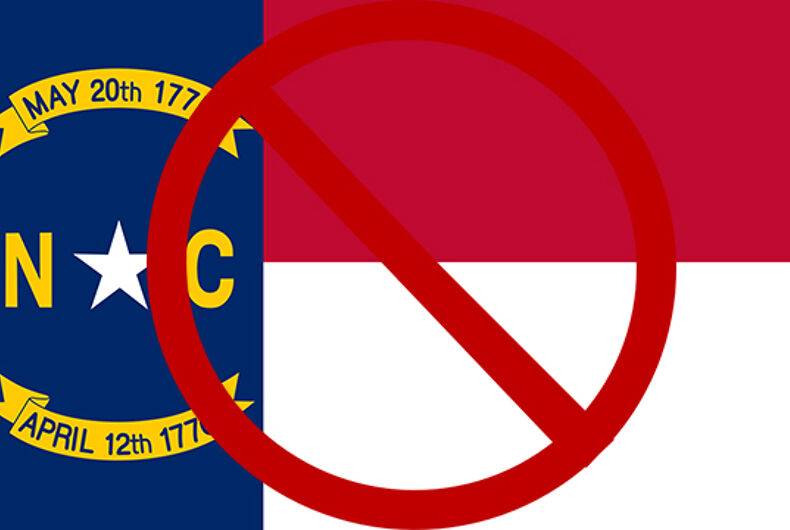 Cities and states are just saying no to North Carolina.Photo: Public Domain

North Carolina found itself on the receiving end of boycotts from cities, states, companies, and organizations over its discriminatory law House Bill 2.

The law, requiring transgender people to use the bathrooms matching the gender on their birth certificate and invalidating non-discrimination laws across the state, was recently repealed by the passage of House Bill 142. But the new law continues to allow for discrimination to the LGBTQ community in public accommodations and private employment, as well as leaving transgender bathroom rights up to the state.

Related: Spare us the PR spin, here’s what North Carolina should really do to fix itself

While the so-called “compromise” was enough to earn Gov. Roy Cooper’s signature, and the return of the NBA, NCAA, and ACC, it hasn’t fooled many cities and states that have been banning non-essential, state funded travel over the state’s regressive laws.

On Wednesday, Attorney General Xavier Becerra announced that California would continue to prohibit state-funded and state-sponsored travel and expenditures to North Carolina, noting that HB142 does not provide a solution to the issue of state-sanctioned discrimination.

“California is inclusive. We take pride in protecting the rights of all our people,” Becerra said in a statement. “Discrimination is unacceptable and we intend to protect LBGT rights. California’s law was enacted to ensure that, with limited exceptions, our taxpayer resources are not spent in states that authorize discrimination on the basis of sexual orientation, gender identity, or gender expression. North Carolina’s new law does not cure the infirmity of this type of discrimination.”

On Thursday, Chicago also announced that the ban on travel to the state would continue.

“As a welcoming city for all, we are clear on our values of tolerance and inclusion, and we won’t stand by idly when discriminatory policies threaten the rights of any single group or community,” said Mayor Rahm Emanuel. “Until North Carolina acknowledges the rights of the LGBTQ community and treats all individuals fairly, the City of Chicago will be taking our business elsewhere, and we encourage others to do the same.”

“We thank California Governor Jerry Brown and California Attorney General Xavier Becerra for their leadership — and we commend Chicago Mayor Rahm Emanuel for taking action in the wake of fresh attacks on equality in North Carolina,” said JoDee Winterhof, HRC Senior Vice President for Policy and Political Affairs. “This sham ‘deal,’ passed without a single LGBTQ person at the table, actually doubles down on discrimination against millions of North Carolinians. It’s far past time North Carolina politicians — both Republican and Democrat — stop using LGBTQ people and other communities as political pawns to target for discrimination. In order for North Carolina to move forward, lawmakers must fully repeal HB2 and pass inclusive non-discrimination protections.”

“Cities across the country are seeing HB142 for what it really is — a fake repeal of HB2,” said Equality NC Executive Director Chris Sgro. “The new law continues to make North Carolina the only state in the nation to reserve for itself the exclusive ability to regulate bathroom access and one of only three states to ban cities from passing crucial non-discrimination protections. Cities like Chicago want to ensure that all of their employees are safe when traveling. It is unfortunate that HB142 continues to put LGBTQ people in harm’s way when a simple full repeal of HB2 would have resolved the issue.”

Sean Spicer’s ignorance about the Holocaust is dangerous