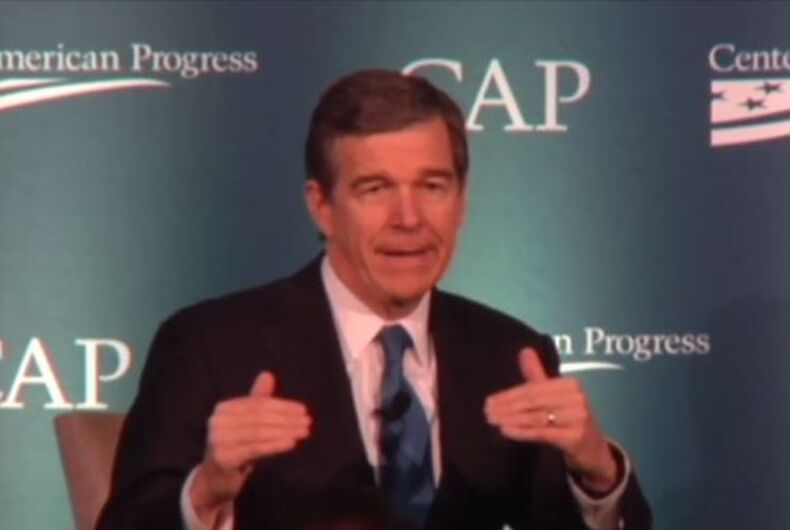 Gov. Roy Cooper, speaking at an event hosted by the Center for American Progress, pledged to keep fighting for LBGTQ rights.Photo: CAP/YouTube

North Carolina Governor Roy Cooper said on Tuesday that he would sign an executive order extending protections to the LGBTQ community.

“My goal is statewide LGBT protections in North Carolina, and I’m going to keep fighting every day until I get to that goal,” Cooper said.

The pledge came during remarks Cooper made at a conference for the progressive thinktank the Center for American Progress, while asked to address the anti-LGBTQ law he inherited, House Bill 2 (HB2), and the compromise he allowed to go through, House Bill 142 (HB142).

Cooper pointed to the GOP super-majority in the North Carolina General Assembly as standing in the way of the full repeal of HB2 without compromise, which he said he wanted.

“It wasn’t going to be possible for over the at least next two years,” Cooper said. “So I had a choice: Do I continue to make a statement and pound on the table, and nothing happen, or do I take a positive step, make progress, and continue to fight? I chose the latter for my state, because we got rid of the birth certificate requirement, we opened up the ability of local governments to offer some protections now, and some in the future.”

HB2 prohibited transgender people from using the bathrooms and locker rooms consistent with their gender identity when in government-owned buildings, and nullified all non-discrimination ordinances passed by cities in the state. The HB2 repeal bill, HB142, still prevents entities under the government’s domain from enacting policies regarding multiple-occupancy bathrooms and locker rooms, and prevents local governments from enacting legislation to protect LGBTQ people in employment and public accommodations until December 1, 2020.

“It would have been politically and probably emotionally easier for me to keep pounding the table and not accept a compromise but I knew it wasn’t right,” Cooper told the CAP conference attendees in D.C.

Raleigh’s News & Observer reports that Cooper’s order would only apply to the departments the governor controls. He did not elaborate on the order during a phone interview, but did promise to do more.

“I said when we repealed HB2 and initiated the compromise, we needed to take additional steps to make sure we protect LGBT residents,” Cooper said. “We’re working on an executive order that will help further those goals.”

LGBTQ Nation has reached out to the governor, asking what would be included in the order and who would be protected.

Cooper’s remarks received a negative response from Chris Sgro, formerly the executive director at Equality North Carolina and newly hired communications director for the Human Rights Campaign, who tweeted that the governor was still dodging his responsibility to the LGBTQ community.

.@RoyCooperNC continued refusal to take responsibility for negative consequences on LGBT community of bill he signed is disheartening #ncpol

You can watch Cooper’s response to the question about HB2 and HB142 below, starting around the 1 hour, 26 minute mark.

Cooper also spoke about the need to protect voting rights, warning that the Republicans in North Carolina would keep fighting for regressive laws even in spite of the Supreme Court decision upholding voter protections, and the importance of good public education in the state.

You can watch Cooper’s full remarks in the video below, starting around the 1 hour, 14 minute mark.

Why Rosie won’t be playing Steve Bannon on SNL