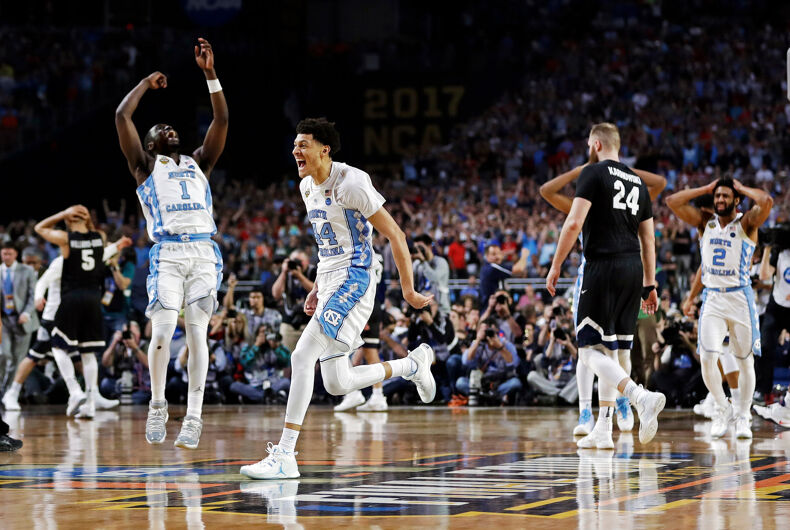 North Carolina “repealed” its anti-LGBTQ law House Bill 2 (HB2) at the end of last month, but replaced it with another law, House Bill 142 (HB142) that is similarly discriminatory against the community. While cities and states have held firm in their travel boycotts, the NCAA has decided that the move is good enough and has lifted its ban.

The organization announced on Tuesday that it had awarded men’s basketball tournament games in 2020 and 2021 to the state, along with several other championship events, reports the Associated Press. Two weeks earlier the NCAA said it had “reluctantly” agreed to consider North Carolina again for hosting duties, saying the compromise had met “minimal” requirements.

Governor Roy Cooper, who won his election against Republican Pat McCrory, who signed HB2 into law, in large part on a repeal message, said both he and the NCAA wanted a clean repeal. This, he said, was the best that could be done given the Republican supermajority in both the House and the Senate.

HB2 prevented transgender individuals from using the bathrooms and locker rooms matching their gender identity in public buildings, as well as nullifying non-discrimination ordinances passed by cities and municipalities across the state.

HB142 still allows for anti-LGBTQ discrimination in private employment and public accommodations, and leaves trans bathroom rights up to a hostile state government, barring local governments and schools from making such rules.

LGBTQ rights advocates are upset at the decision.

“The NCAA has fallen ‘hook, line, and sinker’ for this ‘bait and switch’ sham ‘deal’ doubling down on discrimination,” said JoDee Winterhof, HRC Senior Vice President for Policy and Political Affairs, in a statement. “Even worse, the NCAA has inexcusably gone back on its promise to ensure all championship games are held in locations that are safe, respectful, and free of discrimination. By rewarding North Carolina with championship games, the NCAA has undermined its credibility and is sending a dangerous message to lawmakers across the country who are targeting LGBTQ people with discriminatory state legislation. In addition to protecting the broader LGBTQ community, the NCAA needs to clearly state how they will be protecting their student athletes, personnel and fans.”

“North Carolina’s new law does nothing to guarantee that LGBT people will be protected from discrimination” said James Esseks, director of the ACLU’s LGBT and HIV Project, in a statement. “When the NCAA originally withdrew events from North Carolina, they did so because they claimed to care about ‘fairness and inclusion’ for college athletes and fans. It’s a shame to see that those concerns have already fallen by the wayside.”

“How can LGBTQ people — especially members of the transgender community — be safe and free from discrimination, much less protected against mistreatment or harassment with the sham fake repeal of HB2?” asked Sgro. “The unfortunate reality is they cannot. HB 142 was a cheap political trick that did nothing to alleviate the concerns the NCAA initially outlined when it pulled games from the Tar Heel state last year, and even adds new forms of discrimination to North Carolina’s laws. It is unthinkable that the NCAA would abandon its commitment to LGBTQ fans, players, and administrators by falling for this trick.”