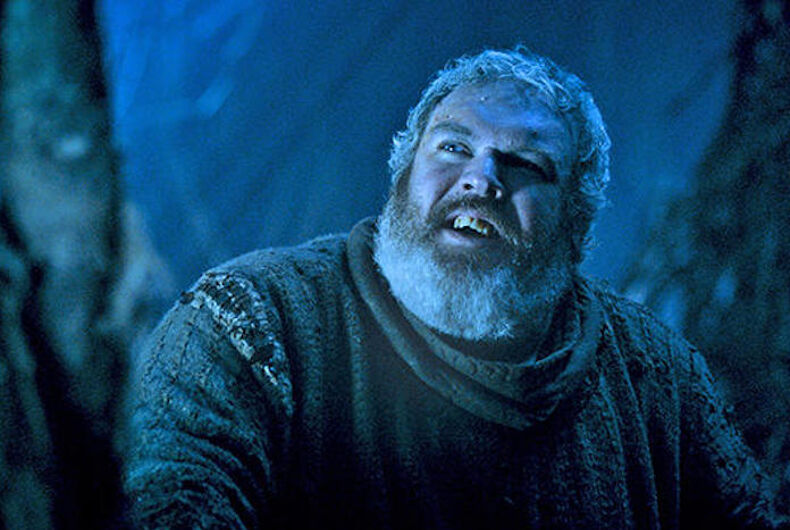 Kristian Nairn as Hodor in "Game of Thrones"Photo: HBO

Kristian Nairn may be best known for his role as the gentle giant Hodor on “Game of Thrones,” but now he’s getting ready for the fight of his life. While his character was killed off last season holding the door against a swarm of undead so his friend (and major character) Bran Stark could get away, Hodor is about to switch directions and hold the door open – for marriage equality in Northern Ireland.

The 6’10” gay actor told the Belfast Telegraph that he may enter politics to help pass marriage equality in the nation. Scotland, Ireland, Britain, and Gibraltar have all legalized same-sex marriage.

“I really don’t understand why we’re the only little enclave of the country that can’t do it,” he told the paper. “I hope that we can come into line with the rest of Europe and the rest of the United Kingdom and Ireland.”

While he hedged his entry into politics, saying “I certainly don’t mean now, definitely not,” he pointed out that so far the government “haven’t exactly done my community any favors.”

“There’s so much other horrible s*** happening in the world at the minute, I think it’s the least of their worries. I think we need to get it sorted out as soon as possible. I don’t see why people are so concerned at what other people do behind closed doors or in their lives.”

The actor, who started his career in entertainment as a drag queen called Revvlon, has returned to his gig as a successful DJ since his character was killed, but posted a photo of his passport on Instagram this week saying he was traveling to Utah to shoot a horror film.

While his new movie project sounds like it might be dark and full of terrors, a Nairn candidacy would be something Hodor could support.

“I definitely would be prepared to make the change myself if it’s going to help my community and help other people. I don’t want anything wildly different to what we have now,” Nairn added.

“It’s just making sure that everyone’s treated equally. Is that so progressive? I don’t think it’s progressive, I think it’s human. And not just gay people – women’s rights, immigrants, people of different ethnic backgrounds. I just don’t see why people are treated differently or with a different set of rules. It’s just wrong.”