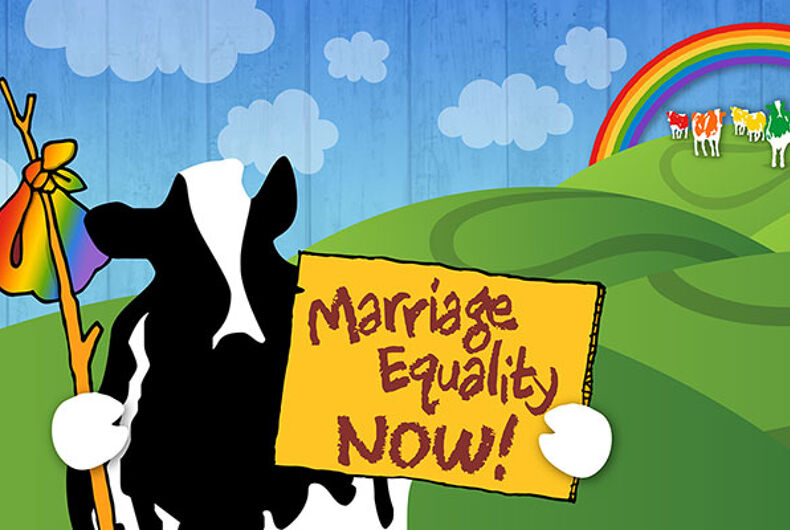 Talk about thinking outside the box. Ice cream maker Ben & Jerry’s have announced a creative way to stand up for marriage equality in Australia.

The sweet retailer will refuse to serve customers two scoops of the same ice cream flavor until the government legalizes same-sex marriage down under.

“Imagine heading down to your local Scoop Shop to order your favourite two scoops of Cookie Dough in a waffle cone. But you find out you are not allowed – Ben & Jerry’s has banned two scoops of the same flavor. You’d be furious!” the corporation said in a statement.

“But this doesn’t even begin to compare to how furious you would be if you were told you were not allowed to marry the person you love. So we are banning two scoops of the same flavor and encouraging our fans to contact their MPs to tell them that the time has come – make same sex marriage legal! Love comes in all flavours!”

The company has set up “post boxes” in all 26 of their Australian stores and are providing customers with postcards they can sign and drop in to be sent to their local member of parliament.

“At Ben & Jerry’s we love love, and we think most Australians do too. More Australians than ever before believe everyone should have the right to love who they love – and marry them too, if that’s what makes you happy,” the chain said in the statement after detailing the convoluted political process marriage equality has had to navigate. “Let’s make it happen!”

Majorities in both houses of parliament support legalizing marriage equality, but the government wants to put the issue to a nationwide non-binding vote first. Obviously, the idea of the majority voting on the civil rights of the minority is an atrocious idea and it has met with stalwart opposition from all political parties, celebrities, corporations, and the general public.