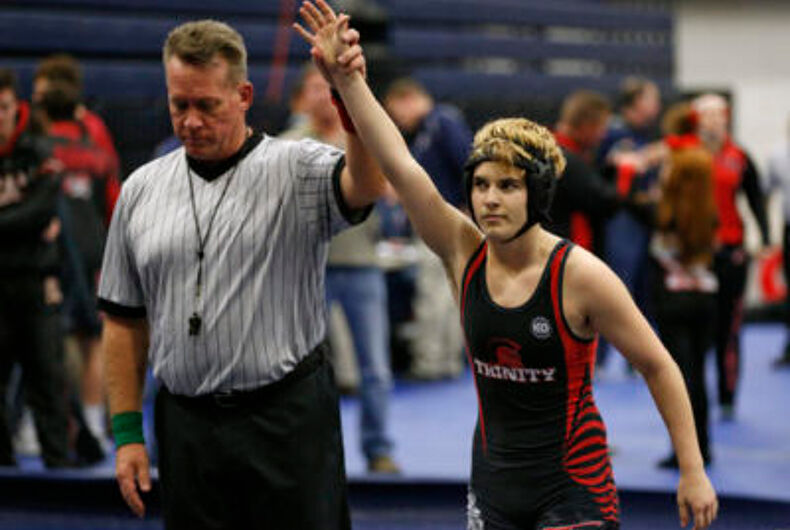 A lawsuit seeking to prevent a transgender wrestler from competing against girls was dismissed in court this week, allowing Mack Beggs to keep his title and the school to retain its current steroid policy.

The suit was originally filed against Texas’s University Interscholastic League (UIL) before the wrestling regional championship in February. That’s where Beggs won the title in the girls’ 110-pound class. It may seem odd that a transgender boy would be competing against girls, but that wasn’t his decision.

Because the UIL requires students to compete based on their sex assigned at birth, Beggs was forced to wrestle girls. If the lawsuit had been successful, it could have prevented him from competing for his high school at all. Either that, or require him to stop taking the hormones prescribed by his doctor. While the UIL generally prohibits testosterone use due to its use as a performance enhancer, it made an exception for Beggs.

The case was dismissed after the UIL filed for a “Plea of Jurisdiction,” arguing that the suit was about how the UIL was interpreting its own rules and was not a matter of law.

Attorney Jim Baudhuin argued that Beggs’s testosterone use posed a risk of injury to other wrestlers and gave him an unfair advantage, but he indicated he was unlikely to appeal the ruling.

“As I’m standing here 15 minutes after the hearing is done, I don’t think we’re going to pursue it any further,” Baudhuin said. “This was a very difficult, frustrating case.”

According to the Dallas News, there’s also a bill under consideration that would prohibit the UIL from making such exceptions without seeing a student athlete’s medical records. But that bill is not expected to make it out of committee during the current legislative session.

Beggs recently won another victory: USA Wrestling adopted a new policy making athletes transitioning from female to make only eligible to compete in the male category, which means he can compete with other boys in non-school competitions.

Standing by their man: These LGBTQ Trump supporters are still in his corner