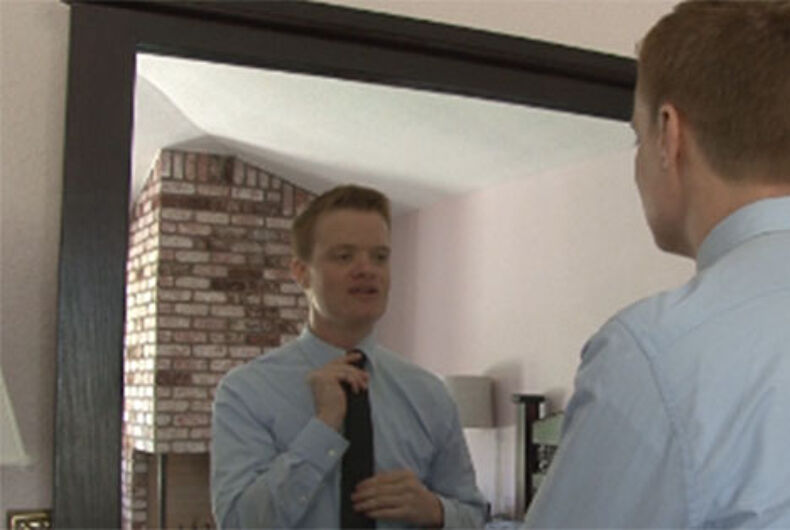 “First, do no harm,” is the oath all doctors take, but a lawsuit filed by the American Civil Liberties Union accuses a Sacramento, California area hospital of putting its Catholic doctrine first, ahead of its patient’s needs.

Evan Michael Minton is a transgender man who got the worse news of his life seven months ago. The day before a scheduled hysterectomy at Dignity Health Mercy San Juan Medical Center, he was notified the surgery had been canceled.

He sought the hysterectomy so that his body would at long last be in congruence with his mind, a surgery to affirm his authentic gender as he took the next step in his transition from female to male. But the abrupt cancellation by hospital administrators in Carmichael, California, meant his doctor had to perform the procedure at another Sacramento-area hospital.

Even so, Minton told the Sacramento Bee he suffered extreme frustration and disappointment and spent months reflecting what he would do, ultimately deciding to work with an attorney from the law firm of Covington & Burling, and the ACLU of Northern California, to sue the San Francisco-based hospital chain.

“It devastated me, and I don’t want it to affect my transgender brothers and sisters the way it affected me,” Minton told the paper Tuesday. “No one should have to go through that.”

But LGBTQ patients in some parts of America have little choice. One in six U.S. hospitals is affiliated with the Catholic Church. Bishops and other church leaders wrote to the Obama administration in 2015 to declare their opposition to medically-necessary transgender health care treatment:

“We believe, as do many health care providers, that medical and surgical interventions that attempt to alter one’s sex are, in fact, detrimental to patients,” they wrote in the letter to the U.S. Department of Health and Human Services. “Such interventions are not properly viewed as health care because they do not cure or prevent disease or illness. Rather they reject a person’s nature at birth as male or female.”

And they used the word “mutilate” to describe gender confirmation surgery, writing that “surgical alteration of the genitalia, in particular, mutilates the body by taking a perfectly healthy bodily system and rendering it dysfunctional.”

Their opposition has only grown as federal and state lawmakers across the country try to roll back protections of transgender Americans, according to the ACLU.

“Given the national context, where legal protections for transgender people are under attack, it’s particularly important that in states like California the law is really clear,” Elizabeth Gill, senior staff attorney for the ACLU Northern California, told the Bee.

She said the hospital’s denial is a “clear-cut case of discrimination,” based on California’s Unruh Civil Rights Act, which outlawed discrimination against individuals based on their sex, race, religion, age, disability, marital status or sexual orientation. The suit seeks just $4,000, the minimal amount of damages under the law, according to Gill.

“We have not been served with the complaint and cannot speak to the allegations until we have the opportunity to review them,” Dignity Health Mercy San Juan officials told the paper in a statement Wednesday.

What we can share is that at Dignity Health Mercy San Juan Medical Center, the services we provide are available to all members of the communities we serve without discrimination. We understand how important this surgery is for transgender individuals, and were happy to provide Mr. Minton and his surgeon the use of another Dignity Health hospital for his surgery within a few days.

We do not provide elective sterilizations at Dignity Health’s Catholic facilities in accordance with the Ethical and Religious Directives for Catholic Health Care Services (ERDs) and the medical staff bylaws.

Minton’s surgeon told the Bee Dignity Health officials actually helped her obtain emergency privileges at Methodist Hospital of Sacramento, a Dignity facility that is not bound by Catholic doctrines. The hysterectomy was performed there last September.