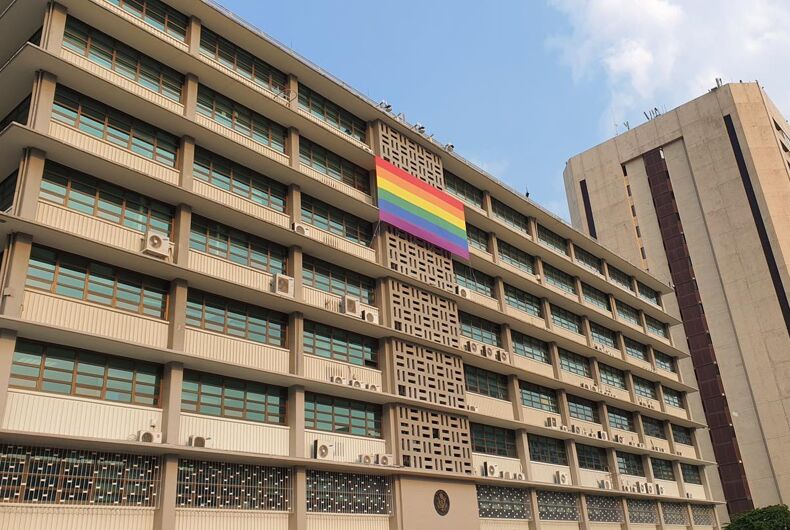 The Chancery at the American embassy in South Korea flies a rainbow flag for Pride month.Photo: Facebook/U.S. Embassy Seoul

House Republicans have introduced legislation prohibiting rainbow Pride flags from being flown outside U.S. embassies in other countries.

Republicans introduced the so-called “Old Glory Only Act” in response to a State Department official putting a rainbow flag up over a South American embassy in 2018, according to Rep. Jeff Duncan (R-S.C.), one of the act’s co-sponsors.

The proposed law would only allow U.S. and military flags flown at embassies and diplomatic facilities. The law follows embassies flying the Black Lives Matter (BLM) banner and Pride flags in previous years.

In a press release, Duncan wrote, “Our beautiful flag, Old Glory, should be the only flag flying and representing our country over our diplomatic and consular posts worldwide…. No other flag or symbol better portrays our shared values than the Stars and Stripes.”

The bill is supported by anti-LGBTQ+ Reps. Marjorie Taylor Greene (R-Ga.), Matt Gaetz (R-Fla.), Louie Gohmert (R-Texas), and other Republican Congress members. Duncan did not comment on his home state’s capitol flying the Confederate flag, a racist emblem, at its Capitol.

In a statement, Greene said the bill will “prevent Hate America flags from flying over American embassies.”

“President Biden’s State Department has already raised a flag over our embassies that doesn’t represent the vast majority of Americans,” she said. Her statement went on to say that BLM is a “radical Marxist group” and “domestic terrorists” who want to “bring mass destruction to our country through Communism.”

Commenters have pointed out that some marginalized groups feel excluded by the U.S. flag, especially as those groups still fight for legal rights and social and financial equality under the law.

The battle over Pride flags at U.S. embassies exploded during the Trump era.

During the presidency of Donald Trump (R), Secretary of State Mike Pompeo ordered the U.S. embassy in Seoul, South Korea, to remove a rainbow Pride flag and BLM banner from the exterior of its chancery. The embassy said it had hung the BLM flag to show “solidarity” and “support for the fight against racial injustice and police brutality as we strive to be a more inclusive & just society.”

The State Department at the time said that it requested the BLM banner be removed because BLM is a non-profit organization, and the U.S. has a policy of not promoting or encouraging contributions to any specific groups or organizations.

The administration of President Joe Biden (D) reversed Trump’s ban on rainbow flags at embassies. Biden’s Secretary of State Antony Blinken told American embassies and diplomatic missions that they can fly the Pride flag again as well as “other symbols connoting support for LGBTQ rights based on what is ‘appropriate in light of local conditions.’”

During his January 2021 testimony to the Senate Foreign Relations Committee, Blinken said that he would enact policies that would allow American embassies to support and protect LGBTQ rights around the world by flying the rainbow flag.

“We’ve seen violence directed against LGBTQI people around the world increase,” Blinken told the committee. “We’ve seen, I believe, the highest number of murders of transgender people, particularly women of color, that we’ve seen ever… and so I think the United States playing the role that it should be playing in standing up for and defending the rights of LGBTQI people is something that the Department is going to take on and take on immediately.”

Duncan and House Republicans also support a national “Don’t Say Gay” bill called the “Stop the Sexualization of Children Act,” which would cut federal funding to libraries, school districts, hospitals, government entities, or other organizations for “hosting or promoting any program, event, or literature involving sexually-oriented material.” Duncan and his colleagues also co-sponsored a 2015 bill that would have banned federal courts from ruling in favor of marriage equality.