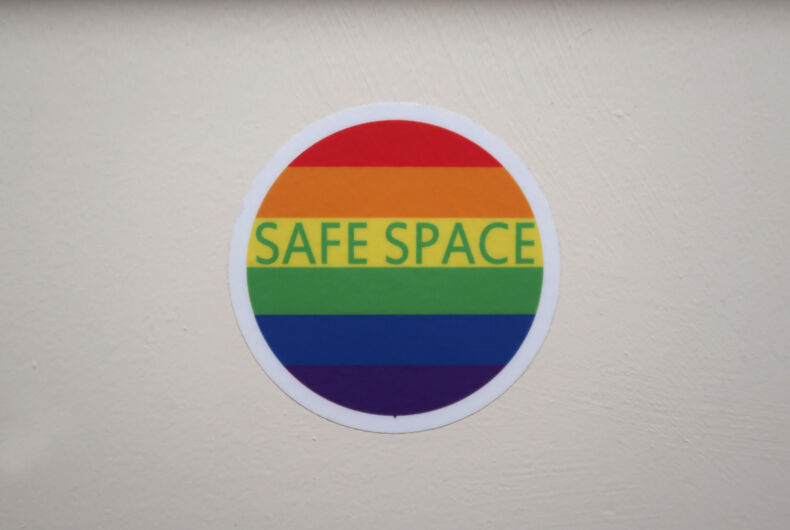 A middle school in New Jersey has removed rainbow-themed “safe zone” signs from its campus. Superintendent Peter Turnamian announced the change at a January 3 board of education meeting.

The LGBTQ+-affirming signage at Long Valley Middle School, in place since 2019, was the result of a student-led effort at inclusiveness. Recent complaints by parents led Turnamian, superintendent for the Washington Township School District, to consult with district lawyers.

“Ultimately, the advice of legal counsel was to have them come down,” Turnamian said of the signs. Lawyers characterized parents’ concern over favoritism as “appropriate criticism.”

The superintendent unveiled plans for a “Profile of a Panther” initiative to replace the safe zone signs, using the school’s mascot to “encourage kindness” among the school’s sixth- to eighth-grade students. Plans for the initiative would be developed with feedback from the community, said Turnamian.

The change marks a victory for parents who lobbied for the signs’ removal. A months-long campaign at school board meetings in the rural township in southern New Jersey brought out residents on both sides of the issue.

“School should be a safe space for all kids, not just some kids,” newly elected school board member John Holly said at the meeting in early January. “Is this just a convenient way to push ideology on kids?” he asked, speaking of the rainbow-themed signage.

One meeting attendee recalled for board members that students were responsible for establishing the safe zone signs.

“There aren’t any kids that are talking about how this is harmful to them,” she said.

A self-identified lesbian and genderqueer student at Long Valley was applauded at a December board meeting: “I can say the LGBTQ+ community is constantly bullied and belittled in our school system. The safe zone rainbow stickers let kids like me know that they are not alone despite their differences. The signs are not hurting anybody, and they are not imprinting on your children. They only promote love and accepting yourself for the way you are.”

“The removal of LGBTQ+ affirming materials from schools is downright shameful. LGBTQ+ students across the country are already facing relentless attacks from legislators, and they deserve — at minimum — to feel safe in the classroom,” said GLSEN Executive Director Melanie Willingham-Jaggers. “We’re so thankful for our educators who create inclusive, affirming environments for their students despite hateful opposition from those who seek to erase and silence LGBTQ+ people. There is no place for discrimination in the classroom, and we will continue to fight for representation and visibility of LGBTQ+ communities in all schools across the country.”

Rainbow flags, stickers, and other LGBTQ+-affirming materials have been under attack at schools across the country recently. Florida’s Don’t Say Gay law has had a chilling effect on students’ and teachers’ speech, with rainbow imagery removed from classrooms by school administrators, or preemptively taken down by teachers in fear of losing their jobs.

In September, Proud Boys showed up at a school board meeting in Missouri to protest the display of a small rainbow flag by a seventh-grade teacher after an alderman demanded in a Facebook post that the district “stop indoctrinating and grooming our kids!” In the same month, Bucks County in Pennsylvania banned all rainbow imagery and other “advocacy materials” in classrooms.