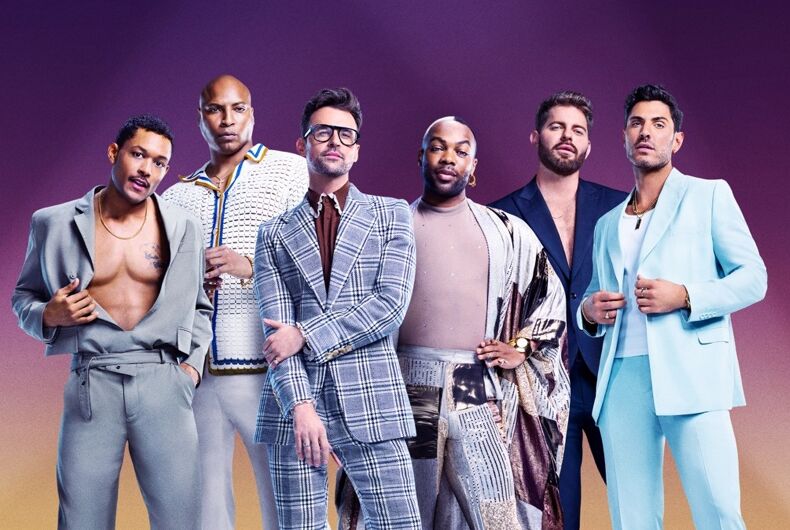 The cast of The Real Friends of WeHoPhoto: Leigh Keily Courtesy of MTV

It should probably come as no surprise that The Real Friends of WeHo, MTV’s new reality series about a group of gay men living in the titular Los Angeles neighborhood, has already sparked controversy. Well ahead of the show’s premiere last night, one cast member was already calling the whole enterprise “fake.” At the same time, it has been speculated that actor Chris Salvatore was fired from the show because some cast members refused to film with him due to his OnlyFans account.

Which, you know, that kind of drama is precisely why we watch these kinds of shows, right? No one really believes the “Real Housewives” are really housewives or that most of them actually know each other outside their shows. Right?

But MTV seems to have also rankled the show’s target audience by scheduling the series to air after RuPaul’s Drag Race—which many fans blame for the hit competition series’ shortened episodes this season.

With all that in mind, I settled in to watch some marginally famous-ish gays misbehave in the series premiere. Here’s just about every thought that fired through my disintegrating brain while watching:

Essential questions about the title of this show: Is the “of” meant to convey that these gays are all friends who reside in WeHo, or that in fact WeHo is itself their (possibly only) real friend? Also, “Real Friends” is so laughably generic. I’d love to hear the other working titles deemed too risqué or inappropriate.

Dorion Renaud says he does not hang out in West Hollywood, once again calling the entire premise of this show into question!

Based on the first three minutes of this episode, these “real friends” hate each other!

What is Issa Rae doing on this reality show? Protect Issa Rae from these high-end gays!

Oh, wow, Issa Rae basically just told Curtis Hamilton that contrary to endangering his acting career by coming out, he’s actually risking it by BEING ON THIS REALITY SHOW! Ha! Wild that they kept that in!

Hmmm. The Todrick Hall of it all…the show is doing this weird thing where it’s vaguely acknowledging that he’s…problematic? But not getting into why, just kind of positioning him as a victim of online gossip, cancel culture, etc. (I do seem to remember some allegations of sexual misconduct a few years ago…)

Ok, full disclosure: a few years ago, I did some (terrible) on-camera interviews for a syndicated entertainment news show that Jaymes Vaughn, a.k.a. Mr. Jonathan Bennett, co-hosted. I never met him. But what’s interesting is that he was clearly doing some code-switching for that show because this is not the accent he used in his role as host.

Joey Zauzig…I…don’t know what to say. Like, I know I’m being paid to have thoughts about this show and express them, but…Joey Zauzig has sucked all the thoughts out of my…briang? That’s the word, right? For the goo in your…neck pumpkin?

Ah! Joseph Zaugig is throwing an engagement party that will surely go off without a hitch and everyone will get along splendidly like well-behaved, sophisticated grown-ups. Joseph: “Nothing can go wrong at this party.” That is what we call subtle foreshadowing, a time-honored and consistently effective technique in literature and reality television!

Todrick addresses THE RUMORS: 1) That he didn’t pay for his house (he has the receipts, which we don’t see); 2) That he doesn’t pay his dancers and employees (claims the specific gig in question was advertised as unpaid from the start); 3) That…people didn’t like him on Big Brother (he’s proud of the $200,000 he won, which, fair!).

You have to admire the subtlety and finesse with which this show lays the groundwork for a FEUD between Josephine Zauzoo and poor, dear seemingly level-headed Dorion.

Joseph’s mission on this show is to heroically represent the struggles of and refute the scurrilous misconceptions about a famously unfairly maligned class of people: Influencers.

I would 100% read a deeply considered essay about the clothes these gays wear.

Oh, wait! Poor Dorion is just socially awkward and doesn’t know anybody, and is shy! My allegiance keeps shifting! This show is giving me whiplash!

Aaaaaaand, of course, there’s a hwhite hwoman with flat ironed hair named “Jen” here to reliably stir up the artificial drama between Joseph and Dorion.

Inspired by “Jen” to “have a talk” with Dorion—who is just minding his own business at the buffet—renowned Influencer Joseph Zauzig marches right over to start a fight! But just as the situation is about to get gloriously juvenile…TO BE CONTINUED… Hurrah! A CLIFFHANGER! Is this the end of the real friendship between these real-life friends who live in the real WeHo? Do WeCare? WeDo!