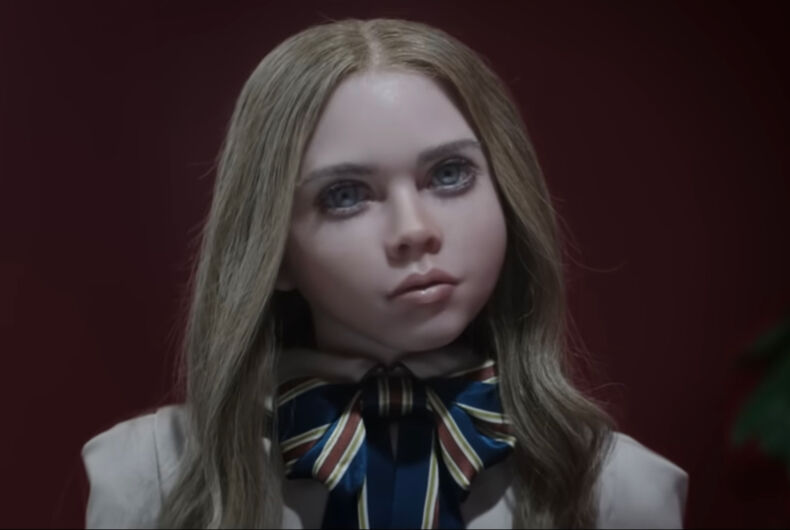 M3gan is coming for the gays! The latest Blumhouse horror flick became instantly memeable when its initial teaser trailer, featuring the film’s titular demon doll dancing malevolently, was released in October. And LGBTQ+ audiences, in particular, latched onto that creepy visual. The Daily Beast’s Justin Kirkland declared the character an instant queer icon.

“We as gay people get to choose our family”

“I think that as soon as I saw that trailer, and I saw that dance, I was like, ‘Oh, I know what’s going to happen here.’ You know, it was very clear to me that it was going to be sort of instant gay iconography,” explained NYU professor and It Came From the Closet editor Joe Vallese in a recent interview with Vox. “M3gan is beautiful and evil, so there’s a subversion that some gay men might be responding to when they see something like that. We’re seeing the story of this doll being told with this particular lens. And whether the movie is good or bad, I don’t know if it matters so much when it comes to the reaction.”

Gays, apparently, are poised to love M3gan, no matter what, and the film is already projected to be a rare box office smash when it opens on Friday. But what do critics have to say about director Gerard Johnstone’s tale of a terrifying toy?

Anyone worried that the actual film couldn’t possibly be as delicious as the memes, never fear. “M3GAN stands up to its hype,” writes Vanity Fair’s Richard Lawson. “It’s funny in ways anticipated and not, and there is enough suspense—or something like suspense—to balance out the coy winks to the audience.” Although, he writes, some true horror fans may bridle at the constraints of the film’s PG-13 rating. “The film is forced to look away from the gruesome stuff and keep the body count relatively low. M3GAN still registers as a very dangerous doll indeed, but some more grown-up mayhem would better offset the film’s Twitter-ready comedy.”

Writing for The New York Times, Jason Zinoman called M3gan “ludicrous, derivative and irresistible,” while raving about Allison Williams’s performance as the engineer who creates M3gan to care for her orphaned niece Cady, (Violet McGraw).

“In early January, when prestige holiday fare tends to give way to trashier pleasures, a good monster and a sense of humor can be enough. This movie has both,” writes Zinoman.

she’s an icon. she’s a legend, and she is the MOMENT !!#M3GAN #meganmovie pic.twitter.com/0y7zJEhWCP

In her review for The Los Angeles Times, Katie Walsh praised Williams’s “skillful intentional affectlessness” in the film, as well as Johnstone’s execution of screenwriters James Wan and Akela Cooper’s horror-comedy tone. She also gave the film credit for mixing parenting horror into the usual anxieties around technology. “The jump scares in the fun, funny thrill ride that is ‘M3GAN’ elicit more giggles than groans, but there are also intriguing connections being made on ‘M3GAN’s’ motherboard, behind the glossy surface.”

Like Walsh, Entertainment Weekly’s Leah Greenblatt writes in her review that M3gan is more comedy than horror. Still, she writes, the film is “a scampering Blumhouse caper that turns out to be blithely self-aware, negligibly jump-scary, and mostly very fun.”

“It wouldn’t be accurate to say that M3GAN is fully unhinged, because it could go much further than it does, and be darker, scarier on every front, including morally,” writes Rolling Stone’s K. Austin Collins. But, he writes, “The movie’s got a wit to it. It knows why we’re here, but offers a nice psychological buttress for it all anyway — a real sense of danger, on Cady’s behalf, that heightens what’s at stake and maybe even adds a dash of suspense.”

Variety’s Owen Gleiberman declared the film “slyly preposterous and also somewhat clever.” “‘M3GAN’ almost feels like it could be a cult film, the sort of thriller that generates a small but devoted following and maybe a sequel or two,” he writes. “You don’t have to take the movie seriously to enjoy it as a high-kitsch cautionary tale for an age when technology, especially for kids, is becoming the new companionship.”