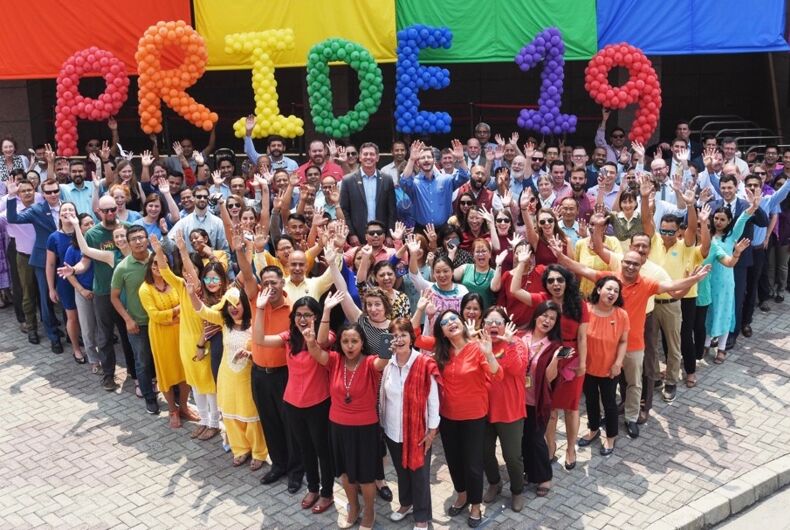 Employees of the US Mission in Nepal celebrate Pride.Photo: Randall Berry

President Donald Trump’s tweet “honoring” Pride Month came on the heels of more attacks on the LGBTQ community and was met with immediate scorn. As if to put a finer point on it, days later the administration announced that despite’s Trump’s tweet, they would not allow embassies to fly the Pride flag as ambassadors have done for years.

But some embassies have found a way to get around the decision or are outright defying the administration’s homophobia, The Washington Post reports. The paper notes that embassies in Korea, Nepal, India, Chile, Austria, and Israel have all taken matters into their own hands.

“This is a category one insurrection,” one diplomat told the paper.

Secretary of State Mike Pompeo, a darling of the religious right and active opponent of LGBTQ equality, has made it his mission to give Christians a license to discriminate against LGBTQ people by forming “religious freedom” committees and envoys. Under his command, embassies are required to get “top level clearance” to fly a Pride flag.

So far into his tenure as the nation’s top diplomat, Pompeo has refused to attend the annual Pride Day event as his predecessors did.

“We fly below the radar,” one fearful employee told the Post. “We survive because they don’t realize we’re here.”

Today, along with the U.S. Mission in Nepal community, I join people around the world in celebrating Lesbian, Gay, Bisexual, Transgender, & Intersex #PrideMonth, and reaffirm the U.S. commitment to defending human rights for all. #Pride2019 pic.twitter.com/5awKWtcP80