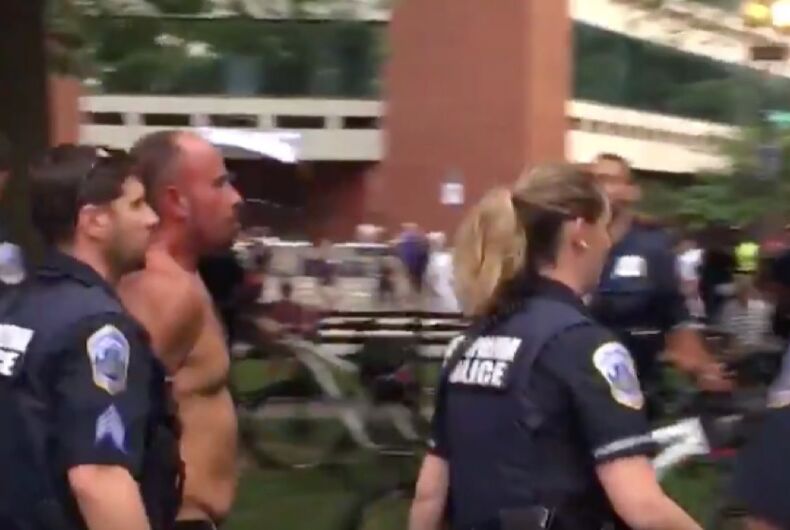 A straight couple triggered the mass shooting scare that caused a stampede at DC’s Capital Pride parade. Both were arrested.

Aftabjit Singh and Melissa Duffy were put in custody after Singh pointed a BB gun at another man he accused of assaulting his partner. Duffy was arrested for assaulting a police officer a short while later.

Spectators fled in panic after Singh pulled out the realistic-looking silver gun. Seven people sustained injuries in the stampede through city streets as partiers knocked down metal barriers and each other in an attempt to escape what they thought was a mass shooting.

“While canvassing the south side of the park, Officer Maio was flagged down by a concerned citizen who pointed out Suspect 1 and stated he was the individual that had a gun in his bag,” a police report released by the city says. “The concerned citizen also indicated a brown bag that was laying underneath a tree.”

“Officer Maio observed Suspect 1 approaching the bag and conducted a stop. Upon observing the indicated bag, which was partially open, Officer Maio observed what appeared to be the body and trigger of a silver handgun. Suspect 1 claimed he pulled out the gun on an unidentified individual who was hitting his significant other,” the report says.

Singh was arrested on the scene and charged with three gun-related offenses and “Disorderly Conduct — Cause Unreasonable Fear.”

Duffy, who described herself as Singh’s “significant other” to police, was arrested on assault charges after she became upset that he had been arrested.

Both Singh and Duffy will appear before the court today to answer the charges.

100 Americans are killed by guns every day so of course people are running for their lives. This isn't how we should have to celebrate #DCPride pic.twitter.com/9X8RhrmNoE

#DCPride #CapitalPride #shooting Marching in the Gay Pride parade in Washington DC. As my girlfriend and I were walking past Dupont Circle, apparently someone started shooting. I did not hear the shots, but caught the moment of the stampede. People went quickly from smiling, pic.twitter.com/oPQdIrM3dG

Panic at pride. Dozens of people started running from Dupont Circle. I’m trying to find out what happened. @ABC7News pic.twitter.com/mHoDp4X1Gm

People running away from rumors of active shooter. Not confirmed. Repeat: nothing confirmed yet. Just rumor at this point, but people are on edge. #CapitalPride pic.twitter.com/ZhM8tMwbLV

Capital #Pride parade ended abruptly moments ago. People started running from Dupont Circle, headed toward Georgetown. Police got on a bullhorn asked those nearby to evacuate immediately. View from a balcony on P St., west of the Circle. Remains unclear what’s going on right now. pic.twitter.com/03XCg9jfUW

.@DCPoliceDept says officers found a gun inside Dupont Circle near this man. He is under arrest and will face a gun possession charge. They don’t believe he actually fired it. Their theory is the loud bangs were barricades crashing as the crowd ran away. pic.twitter.com/N6RFeQ4DDL