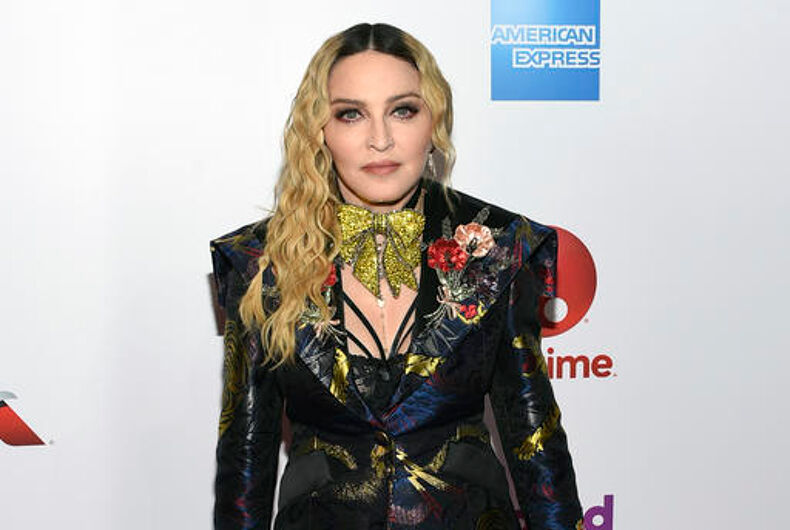 Madonna is heading out on tour this summer. The pop icon announced her upcoming Celebration Tour today via a five-minute video recreating an infamous scene from her 1991 documentary Truth or Dare.

The black-and-white clip shows Madonna and famous friends Amy Schumer, Judd Apatow, Jack Black, Lil Wayne, Diplo, Kate Berlant, Eric Andre, Bob the Drag Queen, Larry Owens, and Meg Stalter gathered around a dinner table playing a game of Truth or Dare, as she famously did with her back-up dancers in the 1991 film.

For better or worse, despite her skill at perpetually reinventing herself, the singer has stayed reliably consistent in at least one respect: her impulse to shock and provoke. That impulse is certainly on display in the new video, in which Madonna dares both Schumer and Bob the Drag Queen to simulate certain sex acts on a bottle of water and a  taralli pugliesi (a delicious Italian snack, highly recommend).

Elsewhere in the video, taking their hostess’s cue, Andre dares Diplo to expose himself, while Diplo dares Madonna to “tongue kiss” Black. Later, Stalter asks Berlant with which person at the table she would spend 12 hours having sex followed by disco dancing and a spaghetti dinner. Unsurprisingly, Berlant chooses Madonna.

The clip ends with Schumer daring Madonna to go on a world tour and play all the hits from her 40-year career.

“You think people would come to that show?” she asks, feigning humility in possibly the video’s most absurd moment.

And thus the Celebration Tour is born! According to the official announcement, the 35-city outing “will take us on Madonna’s artistic journey through four decades and pays respect to the city of New York where her career in music began.”

“I am excited to explore as many songs as possible in hopes to give my fans the show they have been waiting for,” Madonna said in the announcement.

The first leg of the tour brings the singer to North America this summer, beginning in Vancouver in July and featuring stops in Detroit, Chicago, New York, Miami, and Los Angeles. The European leg is set for the fall and will include dates in London, Barcelona, Paris, and Stockholm. RuPaul’s Drag Race alum and We’re Here star Bob the Drag Queen will open for Madonna on all dates.

Dolly Parton’s turning 77. Her philanthropy & LGBTQ+ activism have made her a national treasure