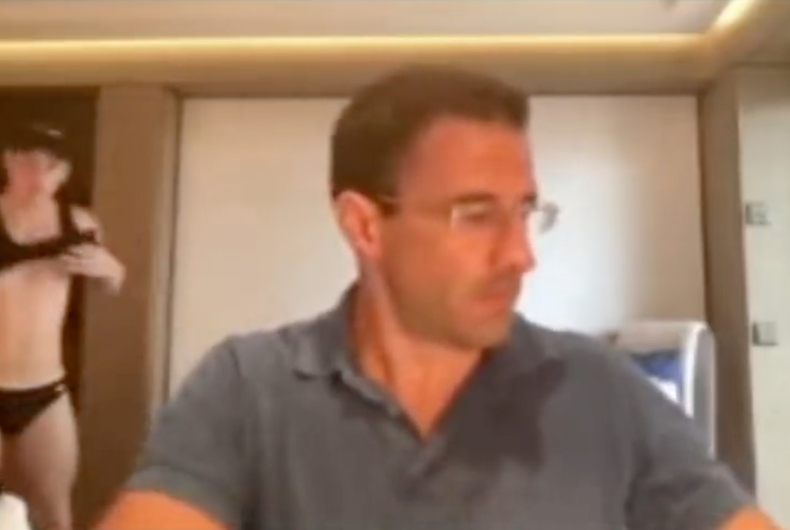 The video was uploaded by self-described journalist Stephanie Hamill, a Turning Point USA “ambassador” and advisor to the National Diversity Coalition for Donald Trump. The clip reveals Heinz on a Zoom call for a supervisors’ meeting from a cruise ship where he was vacationing.

About two hours into the meeting, a man in a black speedo and tank top walks into view. Heinz notices the interruption and cuts off his video for a moment. When he returns, the man is gone.

It was MAGA conspiracy catnip.

Without mentioning the supervisor was on vacation and calling into work from a cruise ship, Hamill described Heinz as “the only supervisor to not show up in person for the meeting,” and intimated nefarious activity: “Clearly he had more important things going on….”

Man in Panties Makes appearance in Arizona Democrat’s government work video.
Matt Heinz is a Pima County Supervisor.
Apparently he was the only supervisor to not show up in person for the meeting.
Clearly he had more important things going on…🙄
pic.twitter.com/XHSVNQGstl

Among funny/awkward Zoom moments since the start of the pandemic, Heinz’s would be up there. It took right-wing trolls to drain the fun away.

“He should be fired from public office,” glummed one commenter.

Despite being on vacation and starring in a fairly drole Zoom mishap, even Heinz just seemed exhausted by the right-wing attention.

“As a public official, I’m pretty used to getting like, you know, targeted and having all sorts of often incorrect stuff said about me – fine,” Heinz told The Advocate when reached for comment.

“But leave my friend alone. He was in a swimsuit. He accidentally walked into the frame for like not even three seconds, was not naked, is clearly an adult, and is not a sex worker – not that there’s anything wrong with that – but it’s just been a really strange reaction.”

Writer Matthew Rettenmund summed up the vibe nicely in a comment with advice for Hamill: “In ‘panties’? You need to get out more.”