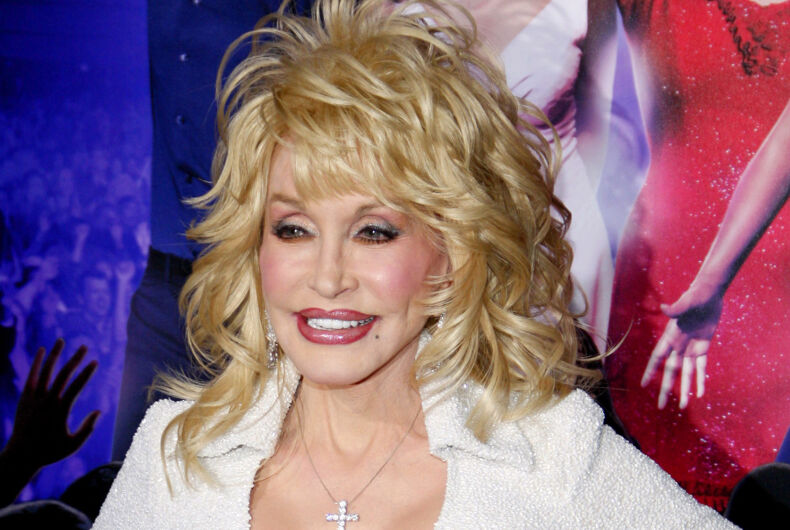 Country music star Dolly Parton will be celebrating her 77 birthday this week. But the famous singer of “Jolene” and other country music hits isn’t just famous for her music, but also for her philanthropy, low-key political activism, and LGBTQ+ advocacy.

Here’s a quick look at why Dolly Parton isn’t just an LGBTQ+ icon, but also a hero to so many across the United States and the globe.

Dolly Parton has been famously quiet about her politics and political views. She even twice rejected President Donald Trump’s offer of the Presidential Medal of Freedom and a statue of her at the Tennessee Capitol.

“I don’t do politics,” she said in a 2019 episode of her biography podcast Dolly Parton’s America. “I have too many fans on both sides of the fence. Of course, I have my opinion, but I learned years ago to keep my mouth shut about things.”

As a result, Dolly Parton has never publicly said whether she’s a Republican or a Democrat. However, The Independent noted that she voiced support for equal rights for all people, removed the word “Dixie” from a Dollywood attraction because of its confederate origins, and has a long history of supporting LGBTQ+ rights.

Looks like I missed a lot! You all are so creative. Now that I’m here, tag me! ❤️ #heyitsdolly #dollytok

In her 1991 song “Family,” Parton sang, “Some are preachers / some are gay / some are addicts, drunks and strays / But not a one is turned away when it’s family.” While the comparison is unflattering, her message of LGBTQ+ acceptance has only become more pronounced through her career.

In 2005, she allowed her song “Travelin’ Thru” to be used in the transgender family road-trip drama Transamerica. The song was also nominated for an Oscar. Parton has spoken against transphobic bathroom bills, telling CNN Money, “I think everybody should be treated with respect,” and adding, “If I have to pee, I’m gonna pee, wherever it’s got to be.”

Dolly Parton has long supported same-sex marriage equality. She has joked, “Why can’t they get married? They should suffer like the rest of us do,” but she thoughtfully added, “I think love is love, and we have no control over that… I think people should be allowed to [marry].”

In 2011, when a woman at a Dollywood amusement park was told to turn her pro-marriage equality T-shirt inside-out, Dolly Parton personally apologized, saying, “Everyone knows of my personal support of the gay and lesbian community.” She also promised that such a thing would never happen again.

She has spoken against anti-LGBTQ+ Christians, saying, “If people want to pass judgment, they’re already sinning… I try to love everybody.” However, Parton isn’t perfect. She angered some fans by saying that some people may identify as nonbinary or pansexual because it’s “fashionable” or “for effect.”

However, she has embraced her gay fans. In a 2016 New York Times interview, Parton said, “I have a huge gay following, and I’m proud of them. Sometimes some of them look more like me than I do.” She may have referenced that she once lost a Dolly Parton look-alike drag contest. “I didn’t win,” she told Good Morning America in 2009. “I didn’t even come in close.”

Dolly Parton isn’t a billionaire…but she could be!

With her Dollywood theme park, 52 studio albums, and gobs of merchandise (including her Doggy Parton pet apparel line), one would think that Dolly Parton would be a billionaire. However, though she’s worth an estimated $650 million according to the website Celebrity Net Worth, it’s speculated that Dolly Parton isn’t a billionaire because she’s generous with her money.

What charities does Dolly Parton support?

Through funding provided by @DollyParton and local community partners, #ImaginationLibrary is dedicated to inspiring a love of reading by gifting free books to children. 🦋 Check availability in your area and register your child today! https://t.co/2YAEWDBgXx pic.twitter.com/bxUVaFotnv

Part of Dolly Parton’s political activism has involved supporting charities and various causes. In 1988, she established the Dollywood Foundation, which has since been re-named the Imagination Library. The charity donates library books to children around the world.

Throughout her career, she has donated money to scholarships, “big buddy” programs, and other educational initiatives to increase graduation rates in her hometown of Sevier County, Tennessee. In 2002, the Dollywood Foundation began giving the Chasing Rainbows Award to a “teacher who has overcome obstacles in his/her life and is making a difference in the lives of children.”

In 1991, she established the Eagle Mountain Sanctuary, a 30,000-square-foot aviary for the country’s largest collection of “non-releasable” bald eagles. She has also helped raise millions for wildfire victims, a hospital in her hometown, and the development of the COVID-19 vaccine. She has also donated her time to causes like reading books to children during the COVID-19 pandemic so they’d be less scared.

On top of all this, Dolly Parton also has the hallmarks of a good leader: She’s known for being generous, authentic, hardworking, forgiving, for having a solid faith and family values, and for exemplifying “servant leader” values, that is, putting others needs before her own to help people their best selves.