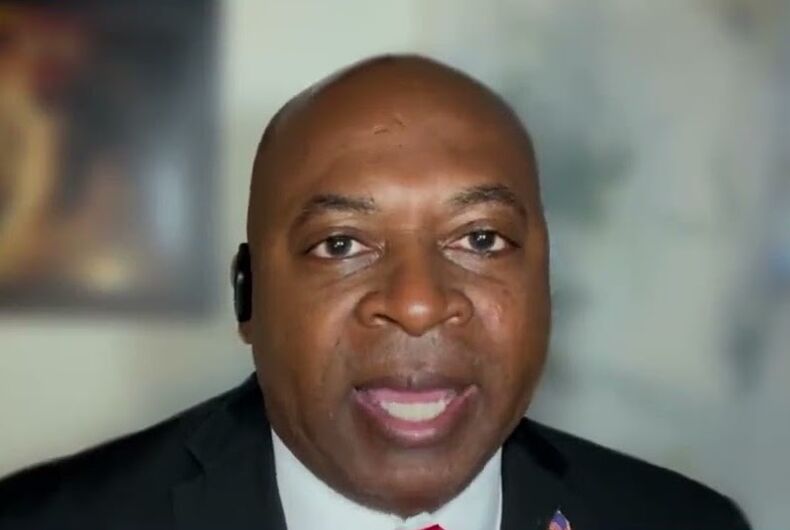 Republican Leon Benjamin, a candidate for U.S. House in Virginia’s Fourth Congressional District, runs a conversion therapy organization that purports to save LGBTQ+ people from “homosexual and lesbian living.” That district is undergoing a special election because the winning candidate from November’s general election passed away several weeks after the election.

In a public April 2017 Facebook post, Benjamin wrote that he had established a ministry called “Escape Hall (Escape from Homosexual and Lesbian Living).”

“Now that we have Transgenders, that is just another form of homosexuality or lesbianism as its roots,” Benjamin wrote. “It’s time for the Church to be the place of deliverance for any who would desire a change and to enter into the Kingdom of God: fornication, adultery, idolatry and witchcraft are genderless- let’s go after the root and manifest the Sons of God! Amen! #ESCHALL #DeliveranceisHere”

Conversion or reparative therapy is a widely debunked and pseudoscientific form of psychological torture that purports to change a person’s sexual orientation or gender identity. Most major American medical, psychological, and pediatric groups have disavowed the practice as harmful and ineffective.

Conversion therapy has been banned in 25 states and 110 U.S. cities. Some Christian conservatives have claimed that the bans violate religious free speech because they prevent faith-based counseling. However, courts have rejected this argument.

Benjamin is a senior pastor of the evangelical New Life Harvest Church. He has publicly spoken about his ex-gay ministry. During a tent revival, he displayed a Bible verse about Sodom and Gomorrah, two towns that, according to the Old Testament, were destroyed for inhospitality. Many evangelicals claim that God destroyed the towns because people who lived there were queer.

During his speech, he compared homosexuals to “adulterers,” “fornicators,” and “smoking crack.” He referred to these things as “sins,” choices, and forms of “unrighteousness.” He said that “real men” and “real women” only love people of the opposite sex. He also implied that homosexuality causes natural disasters like hurricanes and earthquakes.

GOP-backed special election House nominee Leon Benjamin runs a "ministry" for people to "escape" from "homosexual and lesbian living." He also promotes dangerous conversion therapy, telling LGBTQ people they can be "healed" and "come out of homosexuality." https://t.co/0pIhLexjEo pic.twitter.com/TDsmyCSpxG

Though he said he wouldn’t kick gay people out of his church, he said, “Those who want to change, will change.” Many religious LGBTQ+ people have said that being unable to change their LGBTQ+ identity made them feel damaged, sinful, and unworthy of God’s love, which is correlated with suicidal thoughts.

When questioned about this post during a recent appearance on MSNBC’s The Sunday Show, Benjamin responded that LGBTQ+ people are harmed by high gas prices, inflation, and high crime.

“I think all of us are dealing with issues, and we shouldn’t marginalize [LGBTQ+ people],” he said. “And I think my compassion really shows strong enough.”

Benjamin has also claimed that the 2020 presidential election was “stolen by China and many other communistic nations” and that he only lost his 2020 U.S. House race by 23 points because it too was stolen.

Dolly Parton’s turning 77. Her philanthropy & LGBTQ+ activism have made her a national treasure