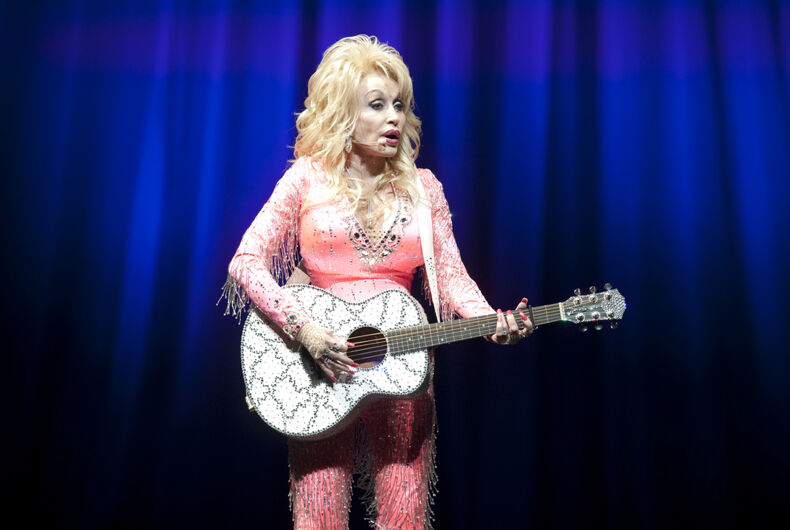 Country music legend Dolly Parton has supported LGBTQ issues for a long time. She was one of the first major country stars to publicly support marriage equality and regularly says that gay men are her biggest fans.

She’s even gone so far as to say if she were born male, she would have “been a drag queen because I love all the ­flamboyant stuff.”

But did Parton, who’s been dogged by rumors that she’s secretly a lesbian, just slam nonbinary and pansexual people in an interview with The Sun?

With more entertainers and celebrities defining themselves as gender fluid or bisexual, including her own goddaughter, Miley Cyrus, Parton is finding it hard to come to terms with the uptick.’

Related: Dolly Parton lost a drag lookalike contest. No one knew it was actually her.

“For me, I’m still an old timer. Sometimes I think it’s just become kind of fashionable to speak out like that. I think some of them even say more than who they really are,” Parton told the tabloid.

“I think they just want to be part of that whole movement to make people think that they’re so free and all that. But I don’t really know how they feel inside. I know how I feel inside,” she said. “Miley, she does a lot of stuff for effect, and I think a lot of them do.”

Parton has been best friends with Judy Ogle since they were children and, like Oprah and her bestie Gayle, the two have been subject to rumors they’re a couple for years. Parton has repeatedly denied the insinuation, but also says it doesn’t bother her. Parton has been married to her husband for 56 years.

“Well, people love to talk, people love to gossip. They’ve said that about Oprah but it’s not true,” Parton said.  “So ­people say that — because you can’t really have a great relationship with a woman. I’m not gay but I have so many gay friends and I accept everybody for who they are.”

“Judy and I have been best friends for 64 years, since we were little kids. Our ­parents knew each other, we grew up together, we were like ­sisters, became best friends. She was very quiet, I was very outgoing. So we made perfect friends. We went all through school together.”

“People love to talk,” she added, “but sometimes that’s your best publicity. I don’t care what they say as long as they don’t hurt other people I love.”

Bernie Sanders announces his 2020 presidential bid & the internet has thoughts

Trump denied a trans woman asylum & deported her. She was killed when she returned.