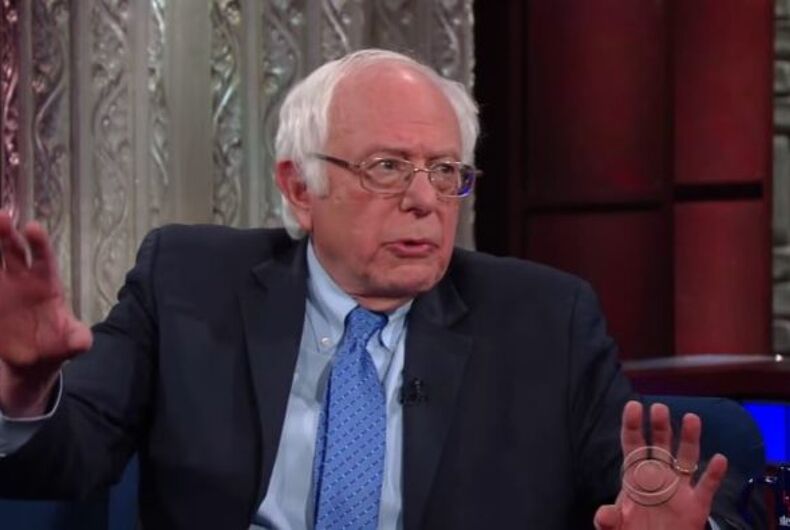 Senator Bernie Sanders (I-VT) announced his presidential bid early this morning in an email to supporters and a video on social media and Twitter went nuts.

I'm running for president. I am asking you to join me today as part of an unprecedented and historic grassroots campaign that will begin with at least 1 million people from across the country. Say you're in: https://t.co/KOTx0WZqRf pic.twitter.com/T1TLH0rm26

Sanders, 77, ran for president in 2016 and ended up losing his primary bid to Hillary Clinton.

But since he lost, his supporters have accused the Democratic party of fixing the primary in Clinton’s favor.

Sanders has spent the intervening time criticizing Democrats for supposedly running on their identities as the party moved to the left, while remaining one of the most staunchly anti-Trump votes in the Senate.

His supporters have remained steadfast, often denouncing his competitors as “corporate.” They point to the positive effects of the campaign, like their belief that it inspired more progressives to run for office in 2018 and pushed the Democratic Party to the left on issues like health care and income inequality.

To say he’s controversial is an understatement. And so Twitter exploded.

Bernie Sanders is running for President again because…

He’s still got it.

SCOTUS can work through their golden years, so just zip it.#StillSanders#RunBernieRun pic.twitter.com/0NmTO033n1

When you find out that Bernie Sanders is running for president…again pic.twitter.com/aGFRPL96Kb

Bernie Sanders has been a civil rights activist since the 1960’s. YALL DID HIM SO FUCKING DIRTY IN 2016 DON’T LET IT HAPPEN AGAIN IN 2020. #Bernie2020 pic.twitter.com/hzWfQV62Ah

Bernie Sanders in a nutshell. pic.twitter.com/JpU6kMebF4

Nah, sorry Bern. Not feeling you after that last round where you basically helped @realDonaldTrump win by not conceding gracefully. You are NOT the one that can beat Chump and you are NOT a Democrat, so I am a "no" from jump. pic.twitter.com/wFRxu9ki3H

Frankly, it's infuriating to see reducing gun deaths not even get a mention in @BernieSanders' 2020 video.

He's allowed @NRA to define his position for years, but if he wants to run as a progressive, he has to move to where most Americans are: building a future with fewer guns.

Where is your fucking tax returns? pic.twitter.com/ROvK9YrdZR

While the left is divided on Sanders, the right apparently thinks that he’s the second coming of Joseph Stalin.

The Trump campaign has now issued a statement on Bernie Sanders, making him the second out of several declared candidates to get one. pic.twitter.com/3bPfFv7jbp