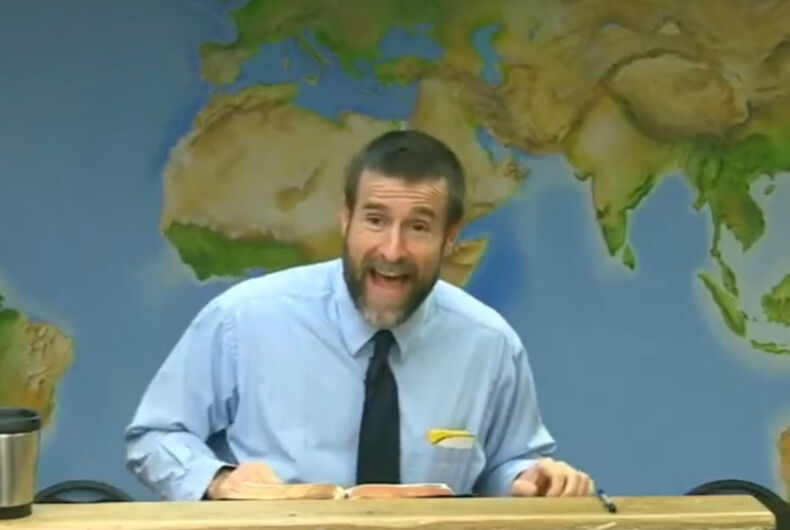 January tends to be a time of year when many of us reconsider how much alcohol we drink, whether due to holiday season excess, New Year’s resolutions, or because we’re participating in the popular “Dry January” challenge. But two infamous anti-LGBTQ+ preachers want their male followers to give up booze —and beer specifically — for an entirely different reason.

Recently, both Steven Anderson, founder of the New Independent Fundamentalist Baptist movement and pastor at the Faithful Word Baptist Church in Tempe, Arizona, and Jonathan Shelley of the Stedfast Baptist Church in Watauga, Texas, posted unhinged rants about the risk of feminization posed to men who drink beer.

“People who drink a lot of alcohol, they end up getting a beer belly. But not only do they get a beer belly, they get the man-boobs,” Anderson said in his video.

“And I’ll tell you why they get that, not only just because of getting overweight, but also because of the fact that beer has in it hops and there are phytoestrogen mimickers in beer that actually hormonally can, you know, make you more feminine as a man. So, the reverse of being so manly because you drink so much alcohol, in fact drinking beer specifically can actually give you more feminine features to your body and cause you to, you know, yeah, like I said.”

Christian hate-preacher Steven Anderson says beer is bad because you'll get a belly and man boobs and the hops will "make you more feminine." pic.twitter.com/qIn27piPTU

Shelley was both more succinct and more incensed in his recent sermon.

“I hate alcohol. It causes so much adultery and infidelity. It causes abuse. It makes men just become stupid losers and effeminate. Hey, let me tell you something: Beer makes you effeminate. The hops in it will feminize you. On purpose.”

Christian hate-preacher Jonathan Shelley says beer is bad because "the hops in it will feminize you." pic.twitter.com/KRnsiIOxQc

Online misinformation about hoppier beers causing “man-boobs” and other sexual problems in men is hardly new. “It’s true that there is a minute quantity of [the estrogen-like compound, known as] 8-prenylnaringenin, in hops, and there ought to be a trace of it in beer, but I would say the levels are too low to function as a [hormone] disruptor,” Richard van Breemen, a professor of medicinal chemistry at the University of Illinois College of Pharmacy in Chicago, told Business Insider in 2015.

Of course, neither Shelley nor Anderson are what you might call reliable sources for scientific or medical information. Both come from the New Independent Fundamentalist Baptist movement, founded by Anderson, which the Anti-Defamation League describes as characterized by “a shared brand of deeply anti-LGBTQ and antisemitic teachings.”

“Anti-LGBTQ bigotry and antisemitism are fundamental to New IFB ideology, as demonstrated by the doctrinal statements on their websites and the content of their sermons,” according to the ADL.

Anderson earned a reputation as one of the most anti-LGBTQ+ preachers in the country after he praised the Pulse nightclub shooter. He has encouraged his congregants to kill all gay people, calling it a “cure for AIDS,” and advocated for world governments to execute gay people.

Shelley, meanwhile, told the Arlington, Texas, city council last year that gay people should be executed, and has declared that gay men are all pedophiles. In 2021, he celebrated the death of a 75-year-old gay man who was killed when an elderly driver accidentally drove into a Florida Pride parade, killing one and injuring two others.

The Freedom Caucus is just a rebranded Tea Party. It’s still made with 100% pure hate