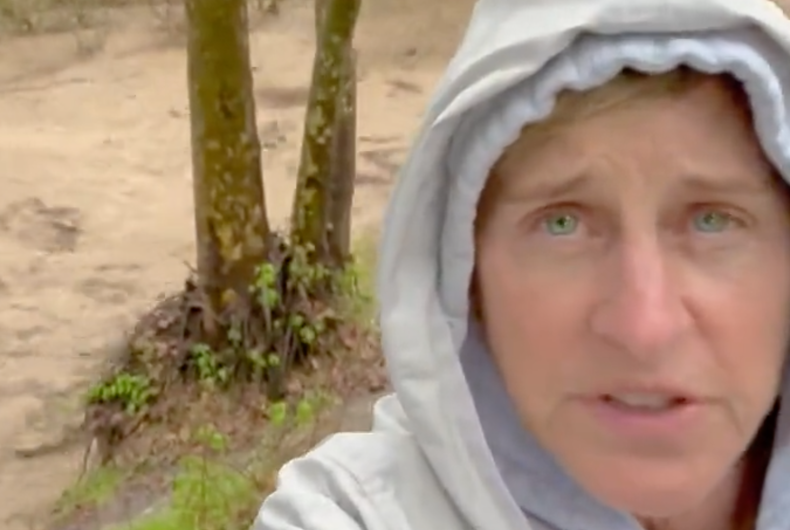 A remarkable series of storms continues to pummel California, bringing record-breaking amounts of rain and snow to the region after years of punishing drought.

Ellen DeGeneres is on the scene.

The longtime chat show host and comedienne tweeted from a usually dormant creek on her estate in Montecito, California, now a torrent of water.

“This stream next to our house never flows, ever,” DeGeneres shouts over the raging waters. “It’s probably about nine feet up. It could go another two feet up. We have horses ready to evacuate.”

While the area was under mandatory evacuation as of Monday afternoon, DeGeneres was advised to stay home with wife Portia de Rossi and staff.

“We are on higher ground so they asked us to shelter in place,” DeGeneres shared.

Montecito is under mandatory evacuation. We are on higher ground so they asked us to shelter in place. Please stay safe everyone. pic.twitter.com/7dv5wfNSzG

Five years ago, following fires in the area, Santa Barbara was hit with mudslides during another heavy rainstorm, killing 23.

“This is crazy,” DeGeneres remarked on the timing. “On the five-year anniversary, we’re having unprecedented rain.”

The death toll in California from this series of storms stands at 14. More than 200,000 people were without power Tuesday morning, and about 90% of the state’s population of 34 million was under flood watch, according to the National Oceanic and Atmospheric Administration.

The state is entering its fourth week of nearly uninterrupted rain and snowfall, and residents are glued to their weather apps watching the atmospheric rivers take shape. At least two more storms are marching across the Pacific from Japan, forecast to hit California within days.

“We expect to see the worst of it still ahead of us,” Gov. Gavin Newsom (D) said at a news conference, with a warning to residents to follow evacuation orders: “Don’t test fate,” he advised.

DeGeneres had her own advisory for fans: “We need to be nicer to Mother Nature, because Mother Nature is not happy with us. Let’s all do our part. Stay safe everybody.”

Dr. Dre rips Marjorie Taylor Greene for using one of his songs without permission