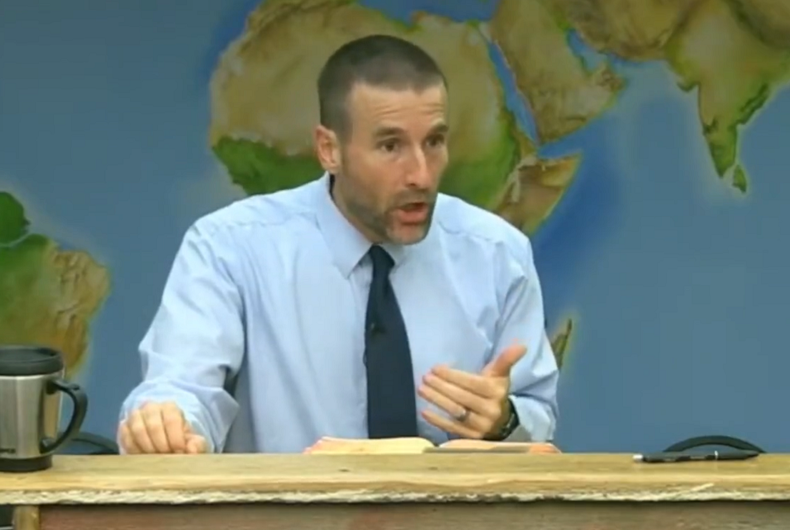 An infamous anti-LGBTQ preacher said he’d rather eat his own vomit than be gay.

“What these people do is… much grosser than eating your own vomit,” said Steven Anderson, founder of the New Independent Fundamentalist Baptist movement and pastor at the Faithful Word Baptist Church in Tempe, Arizona.

“I would rather eat my own vomit out of a bowl with a spoon every day for the rest of my life until I’m 100 years old than to engage in what they do one single time,” Anderson preached, and then he pretended to throw up and eat his own vomit with a spoon.

“That’s pretty gross, right? But ya know what? They’re stinking gross. And you know what? I’m sick of pretending that they’re not.”

He then starts yelling louder and louder.

“I don’t appreciate living in a society where their filth is shoved down my throat every day.”

He ended his tantrum by telling his listeners to get over it if they are grossed out by thinking about eating vomit.

“If you get exposed to one single fa***t or transvestite, it’s 100 times grosser than what I just said to you. So deal with it. So get over it.”

Christian hate-preacher Steven Anderson says he'd rather eat his own vomit "out of a bowl with a spoon every day for the rest of my life until I'm 100" than do anything gay. pic.twitter.com/BakmAjBRDd

Anderson earned himself the reputation as one of the most anti-LGBTQ preachers in the country after he praised the Pulse nightclub shooter, calling the victims “a bunch of disgusting perverts and pedophiles” and “disgusting homosexuals who the Bible says were worthy of death.”

His extreme hate speech has gotten him banned from dozens of countries, including all 26 of Europe’s Schengen states, Botswana, Jamaica, Ireland, South Africa, the United Kingdom, and Canada.

Australia banned him in 2020. In response, Anderson claimed that God punished Australia with wildfires because they were “banning and deporting preachers of the Gospel” so they were facing “the judgment of God.”

Elvira says Madonna hit on her girlfriend “a long time ago”