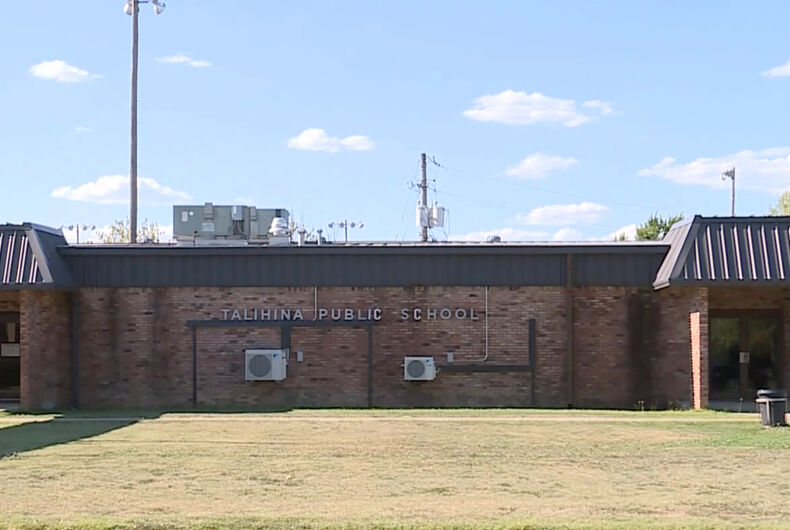 The Oklahoma State Department of Education is investigating a fifth-grade teacher who allegedly encouraged his students to taunt a classmate with an anti-gay slur.

In September, parents Amber and Jonathon Stepp said that their son’s teacher at Talihina Public School told students to call the 11-year-old an anti-gay slur when he was “horseplaying” with another boy.

Amber later recorded a phone call with the teacher in which he admitted to telling students to use the slur.

“Two of the boys were wrestling with each other and one of them started yelling, ‘He’s touching me, he’s touching me.’ And I said, ‘Yeah when he does that you need to say f*g alert,’” the teacher said in the recording Amber shared with local CBS affiliate 5News.

Talihina Public School District launched an investigation into the incident. But while the teacher remains employed, the Stepps say their son, who has special education needs, was sent home during the investigation.

“We have received this complaint and, in response, have completed an investigation and taken appropriate action,” Talihina Public Schools said in a September statement. “This teacher does remain employed in our school district. We cannot comment further as this involves confidential personnel and confidential student information.”

Following the district’s investigation, the Stepps say their son was given the option to return to the teacher’s classroom or a separate all-girls class. Fifth-grade classes at the school were already split by gender due to another incident that occurred before the teacher encouraged students to call the Stepps’ son a slur, Talihina Schools Superintendent Jason Lockhart told LGBTQ Nation.

The Stepps also reached out to the Oklahoma State Department of Education, which launched its own investigation into the teacher’s conduct. During an October 10 school board meeting, Lockhart said, “The state has told us we have handled this extremely professionally, we’ve done what we were supposed to do.”

Lockhart claims that this is the first time such allegations have been reported against the teacher in question. But others say this isn’t an isolated incident. One former student says the teacher asked students if they wanted to play “f-slur tag.”

“It’s despicable behavior by an adult. He’s being paid by our tax dollars to abuse our children,” the former student’s mother, Sarah Sharp, said. “He should be fired.”

Parents will have the opportunity to speak at next month’s meeting of the Talihina school board.

The fifth grade, which was separated by gender, is being reintegrated to comply with Title IX, the federal law that prohibits discrimination in education on the basis of sex. Lockhart says the teacher in question is still teaching his fifth-grade class, but the Stepps’ son is no longer in that class.