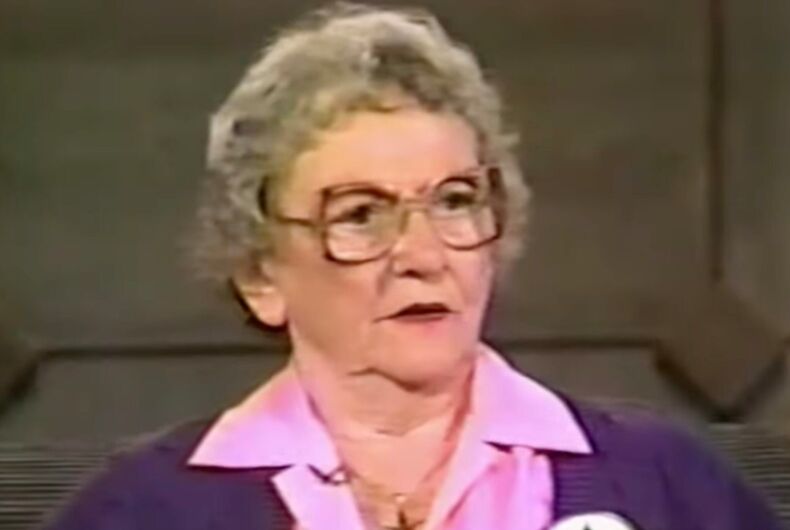 In photographs, she looks like a scout leader about to ask if you’ve had anything to eat today. It takes a moment to see that often, just out of focus, her fingers are holding a joint and her vest is covered in risque pins, including an embroidered cannabis leaf.

Mary Jane Rathbun, jailed thrice and the reason for California’s groundbreaking action on medical cannabis, was better known as Brownie Mary, the patron saint of AIDS patients. More than twenty years after her death, it’s not hard to understand why this grandmotherly figure remains one of San Francisco’s most beloved activists.

She’s been called the Florence Nightingale of HIV/AIDS. She was famous for bringing her magic brownies to gay men and others suffering from wasting syndrome, a name for the deleterious effects on appetite caused by the stigmatized retrovirus.

Much like Nightingale’s work on hygiene and compassionate care, Brownie Mary’s legacy lives on in the recipes and procedures still used today in medicinal edible production.

Rathbun’s illicit distribution began in the early 1970s, when she was in her early 50s, while she worked at an IHOP in the Castro, 37 years before government-approved research finally proved that her hypothesis about distributing ingestible cannabis to AIDS patients was worth investigating.

At first, she tried joints, but because there were restrictions and hazards due to the initial lack of medicine targeting lung infections that were common in AIDS patients, Rathbun innovated.

She switched to a secret recipe for brownies that involved butter; donated, clean, high-grade cannabis; and a mother’s love. She called the young gay men in Ward 86 – frequently abandoned because of the stigma and hatred around AIDS – her kids.

When she was arrested, the fates aligned and she was granted permission to choose a charity for her court-mandated penance. She chose the Shanti Project, one of the first healthcare organizations to pivot their mission and focus on comforting end-of-life AIDS victims.

Though President Reagan is often the primary target of blame for the United States government’s merciless and spiteful inaction during the AIDS crisis, another figure equally deserving of vitriol is James Mason, the surgeon general who later went on to write Latter Day Saints pamphlets about the dangers of homosexuality.

After Mary’s third arrest for serving her medicinal brownies to AIDS patients, she attended a protest in Washington, D.C. despite facing felony charges.

In the fall of 1992, desperate activists served brownies, wrapped a senator’s house in a giant condom, and threw actual cremated remains in a protest known as the Ashes Action, the flier for which was a poem in the shape of an urn.

Brownie Mary continued to agitate for compassionate care, especially regarding research into the positive health effects she’d noticed that cannabinoids have on AIDS patients. Her tireless work with fellow activists is the credited reason California was the first state to legalize cannabis.

Despite being a target for the War on Drugs, Rathbun continued her work toward a community that cares for its most vulnerable and ostracized members, be it with sweet baked goods or poignant protests.

Today, the Brownie Mary collection lives in the basement of the San Francisco Main Library. Patrons may ask the librarians to haul up the soft gray boxes that tell Mary Jane Rathbun’s remarkable story. Among the pictures and pins lie recipes for THC spaghetti and a letter from Nancy Pelosi on support for medical cannabis activists.

From a horrific childhood to the loss of her only daughter, Rathbun had a bitter life before becoming the lamp-bearer for the AIDS movement. Grief was her most constant companion; she lost hundreds of friends and family to HIV and AIDS due to the lack of action the United States government chose to take. But she never lost her fighting spirit.

When prosecutor Gene Tunney went after her, Brownie Mary’s popularity made him regret it. Instead of being cowed into hiding, she became a national media star. She even threatened to request that her confiscated pot be returned to her when he inevitably dropped the charges due to public pressure.

After a long, eventful life fueled by friendship and dessert, Brownie Mary passed away in April of 1999. Her celebration of life in the Castro was lit by candles, among other things.

In a remarkable turn, the San Francisco District Attorney himself, Terrence Hallinan, came to her vigil to announce that he would no longer prosecute anyone who used medical cannabis. Her partners in the activist movement laughed that she was probably up there, way up high, making brownies for God.