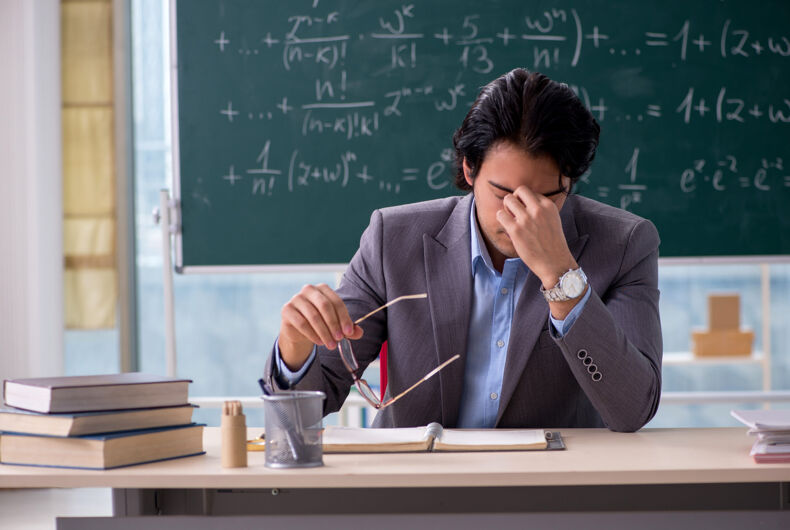 A North Dakota Republican has introduced a bill that would fine organizations that receive state funding if those involved use pronouns that align with people’s genders rather than the sex they were assigned at birth.

This means that public schools – or even teachers themselves – would be fined $1,500 for respecting trans students’ gender identities, and the bill isn’t just restricted to students.

“Say they’re a boy, but they come to school and say they’re a girl. As far as that school is concerned in this bill, that person is still a boy,” said the bill’s sponsor, Republican state Sen. David Clemens, when testifying to the Senate Judiciary Committee in support of the bill. “If it becomes contested, the burden will be on the girl, the so-called girl, or the boy, to prove that he is a girl.”

He also said that the bill “does not publicly outlaw an individual’s personal expression, but it does outlaw the use of public funds to promote or support anything that is contrary to a person’s biological sex at birth.”

The bill isn’t limited to just students, saying that “words referring to an individual, person, employer, employee, contestant, participant, member, student, or juvenile must be used in the context of that person’s sex as determined at birth.”

According to KFYR, more than 90 testimonials were submitted against the bill, and only Clemens testified in its favor. The state senate judiciary committee also unanimously voted to give the bill a “do not pass” recommendation, saying the bill is not well written and would be difficult to enforce. It will still move on to the state senate floor from here.

The Bismarck Tribune reported that Clemens was confronted after the meeting by Christina Feldmann, the mother of a trans daughter who died by suicide in 2021.

“If she were to have gone to a school that referred to her as he/him, we would have lost her much sooner,” Feldmann reportedly told Clemens. “Your bill will kill children. It’s important that you be aware of that.”

Clemens then not only called Feldmann’s daughter her son but asked if they took her to “counseling or help to bring her back to thinking that she was a boy.”

Opponents of the bill have argued that it discriminates against trans people, could violate people’s First Amendment right to free speech, and that it is way too vague.

“In essence, this bill requires an imprecise and indiscernible group of people and entities to engage in unclear conduct around unknowable characteristics,” said Christina Sambor of the North Dakota Human Rights Coalition during her testimony.

Another Republican lawmaker in the state, state Sen. Larry Luick, has also introduced a bill against using someone’s proper pronouns. Senate Bill 2231 would make it discrimination for those involved with government entities to use pronouns that don’t align with someone’s sex assigned at birth and also seeks to outlaw all school policy and instruction on gender identity.

According to the Bismarck Tribune, Sen. Luick described “situations where a young person has demanded that they be called the pronouns” and explained, “I don’t like that. I think that their given name is more appropriate for them.”

Editor’s note: This article mentions suicide. If you need to talk to someone now, call the Trans Lifeline at 1-877-565-8860. It’s staffed by trans people, for trans people. The Trevor Project provides a safe, judgement-free place to talk for LGBTQ youth at 1-866-488-7386. You can also call the National Suicide Prevention Lifeline at 1-800-273-8255.
Politics
Anti-Trans Discrimination, David Clemens, Larry Luick, North Dakota, pronouns