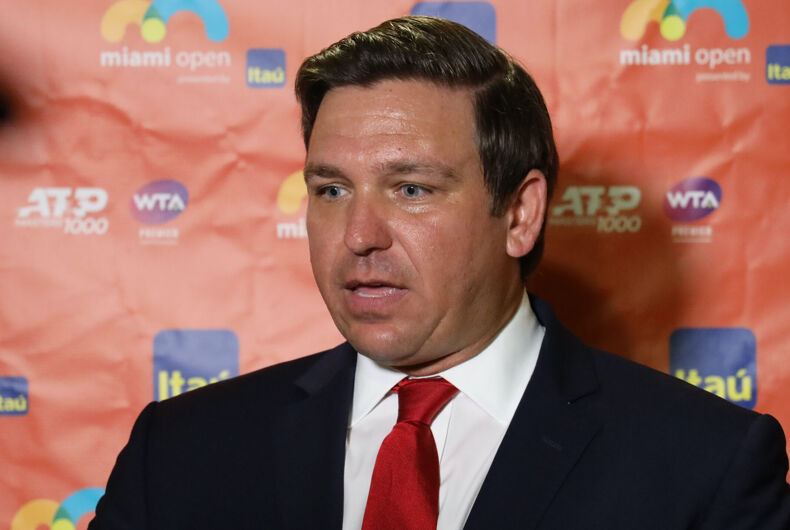 The DeSantis administration in Florida has requested information on people who receive gender-affirming healthcare at Florida universities.

On January 11, Florida Gov. Ron DeSantis’s (R) budget director, Chris Spencer, sent a survey to the board of trustee chairs at 12 state universities.

“Our office has learned that several state universities provide services to persons suffering from gender dysphoria,” Spencer wrote. “On behalf of the Governor, I hereby request that you respond to the enclosed inquiries related to such services.”

The survey reportedly asks for data on the number of individuals who have been diagnosed with gender dysphoria or received treatment in campus clinics. It asks universities to provide the number of students or individuals who received gender-affirming treatments, including surgical procedures, over the last five years and where the treatment was sought, as well as a breakdown by age of people prescribed hormones or hormone antagonists, or who underwent surgical procedures.

The survey instructs universities to protect students’ identities when providing the information.

The memo, which was released on Wednesday, did not say what DeSantis plans to do with the information. Spencer wrote that completing the survey was part of their obligation to govern institutional resources and protect the public interest.

As Politico notes, DeSantis’s budget requests are to be released in February.

“We can see cuts in funding for universities to treat students with this condition, and I think an all-out elimination of services is certainly on the table,” Florida House Democratic Leader Fentrice Driskell said of the administration’s request.

In a statement, Equality Florida press secretary Brandon Wolf said, “This is another example of DeSantis using his office to attempt to intimidate colleges and universities into becoming less inclusive of their students for his political gain. Those institutions should continue providing affirming services for all students despite the governor’s attempts to intimidate them.”

“Ron DeSantis is now demanding info from all public universities about the services they provide transgender students,” Florida Rep. Carlos Guillermo Smith (D) wrote in a Wednesday tweet. “This is an attempt to intimidate them out of supporting trans students and shutting down research related to gender-affirming care without passing a single law.”

Ron DeSantis is now demanding info from all public universities about the services they provide transgender students.

This is an attempt to intimidate them out of supporting trans students and shutting down research related to gender-affirming care without passing a single law. pic.twitter.com/uohBNYl5W0

Earlier this month, the DeSantis administration requested information from state universities about spending on diversity, equity, and inclusion programs.

Driskell accused the governor, who has risen to national prominence on his “anti-woke” and anti-LGBTQ+ agenda, of trying to remake Florida universities “in his own image” by influencing what can be taught and how students are treated.

“I’ve never seen anything like this. It’s a really terrifying place that we’re at in Florida history,” Driskell said. “What can happen is a brain drain where we have Florida students not want to stay here and attend school at our public colleges and universities.”