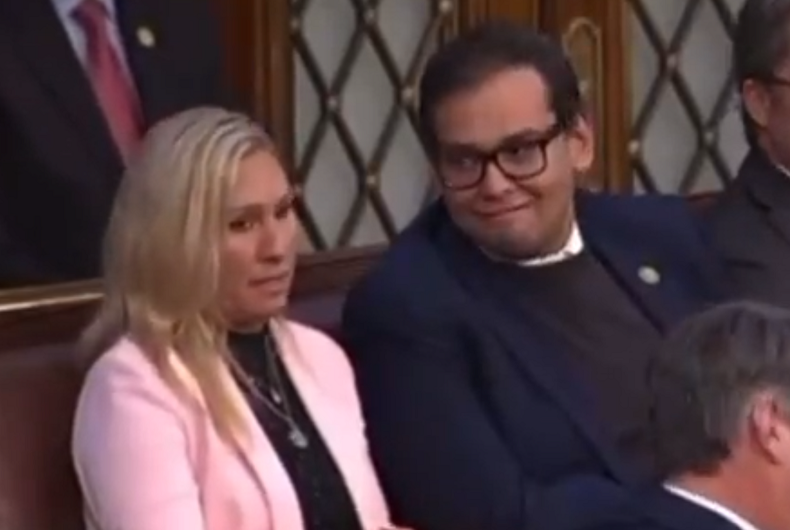 Before he became a Republican Congressman who compares talking about LGBTQ+ people in the presence of children to “grooming,” out Rep. George Santos (R-NY) was a drag queen named Kitara Ravache, one of his old drag friends from Brazil said. And she has a picture to prove it.

But Santos himself denies that he ever performed in drag, calling it an “outrageous claim” made up by the media.

MSNBC journalist Marisa Kabas said that she spoke with Eula Rochard, a 58-year-old drag queen in Brazil who says she knew George Santos (who was going by the name Anthony at the time) back when he did drag under the name Kitara. She provided a picture that she said was from 2008 as proof.

Rochard said that she – like many Brazilians – had been following the story of Santos getting exposed as a liar and accused of campaign finance misdeeds and theft when she recognized him. She dug up an old photo of him because her friends didn’t believe she knew Santos. She said Santos was 16 or 17 when they met.

NEW: I just spoke by phone with Eula Rochard, a Brazilian drag queen who was friends with George Santos when he lived near Rio. She said everyone knew him as Anthony (*never* George), or by his drag name, Kitara, and confirms this photo is from a 2008 drag show at Icaraí Beach. pic.twitter.com/1MeeDR1O2O

“Me with the American Republican deputy [Brazilian word for legislator] at the Niterói [a suburb of Rio de Janeiro] parade,” Rochard wrote on Instagram. “There’s the proof for those who called me a liar.”

Reuters has since spoken to another friend of Santos from his time in Brazil who said that Santos competed in drag pageants in Brazil. The friend, who didn’t want to be named in the media, said that Santos wanted to be Miss Gay Rio de Janeiro.

Rochard told Reuters that Santos was a “poor” drag queen in 2005 when he started, only able to afford a black dress. But “he came back to Niterói with a lot of money” in 2008 and wore an extravagant pink dress. He competed in a pageant that year, she said, but he lost.

“He’s changed a lot, but he was always a liar,” she said. “He was always such a dreamer.”

While many people in the LGBTQ+ community would love to have a former drag queen in Congress, it’s not exactly the best moment to be associated with drag on the right. Conservatives spent last year demonizing drag queens as sexual predators who either want to turn children transgender or sexually abuse them. Santos himself has participated in the GOP’s contrived moral panic about drag queens and “grooming.”

So it’s not surprising that he’s denying it all.

“The most recent obsession from the media claiming that I am a drag Queen or ‘performed’ as a drag Queen is categorically false,” he wrote on Twitter.

“The media continues to make outrageous claims about my life while I am working to deliver results,” he continued. “I will not be distracted nor fazed by this.”

The most recent obsession from the media claiming that I am a drag Queen or “performed” as a drag Queen is categorically false.

The media continues to make outrageous claims about my life while I am working to deliver results.

I will not be distracted nor fazed by this.

People on Twitter did not seem to believe his denials.

You lied about everything else, why would we believe you now?

Most Americans have ZERO issue with u being a drag Queen. However,ur MAGA party don’t/wouldn’t consider you human because of it. The issue is that you are an admitted serial liar,and your words,even here in this tweet,can’t be trusted. But,you’re definitely in the ‘right’ party🤷🏽

Tell us next how you’re not a dog murderer who grifted a homeless veteran, you pathetic serial liar.

George, we love drag queens. We don’t love you. The people of #NY03 have come together in a way that I thought would never be possible. Republicans & Democrats alike are calling on you to resign.

For once in your life, do the right thing, let us have dignified representation.

Thank you for clearing this up George Santos, a.k.a Anthony Zebrosky, a.k.a Anthony Devolder, a.k.a Kitara Ravache. You couldn't be a more perfect Republican if you tried.

This is the one allegation you choose to deny? You are truly pathetic.

Santos supported Florida’s Don’t Say Gay law, which bans discussions of sexual orientation and gender identity in lower grades and restricts them in upper grades, saying in a Facebook video in April 2022: “Hey, everyone. George Santos here…. As a gay man, I stand proudly behind not teaching our children sex or sexual orientation.” In a caption for the video, Santos said Democrats want to “groom our kids.”

Since starting his tenure in Congress earlier this month, Santos has cozied up with Rep. Marjorie Taylor Greene (R-GA), who has been protesting drag queens since before she was in office. She also wants to ban schools from allowing kids to see drag queens, comparing them to sex workers.

“We must protect children from child grooming predators & abusers in every way possible,” she tweeted in June 2022, referring to drag queens.

While House Republican leadership gave Santos two committee assignments and appear to be supportive of him staying in the House even though numerous allegations have been made against him, a history as a drag queen may be the thing that makes him lose support from his colleagues.