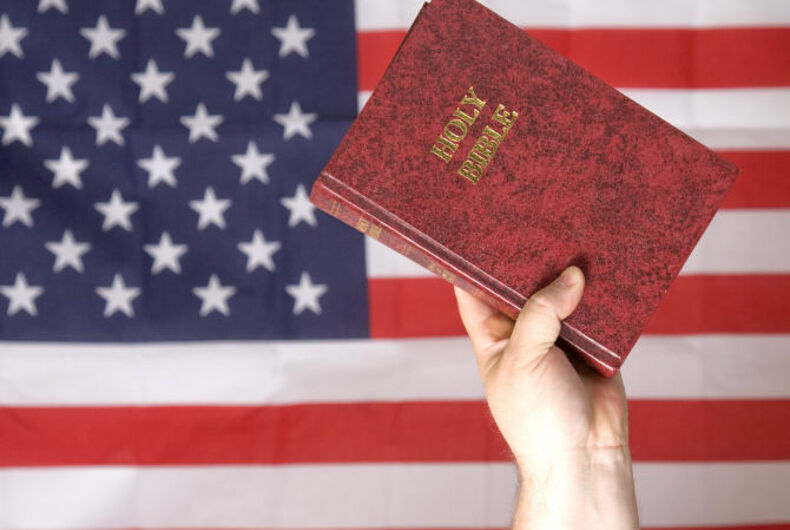 The religious right has long argued that the separation of church and state is a false premise and has focused their hatred on the Johnson Amendment, a 1954 law that threatens 501(c)(3) organizations, such as churches, charities, and universities, with loss of their tax-exempt status if they endorse political candidates. When he was president, Donald Trump promised to “totally destroy the Johnson amendment and allow our representatives of faith to speak freely and without fear of retribution.”

Trump never got around to gutting the Johnson amendment, but as it turns out, it doesn’t matter. A new investigation by ProPublica and the Texas Tribune finds that right-wing churches routinely flout the law without fear of retribution from the IRS.

At this point, thanks to Trump, “some politically-minded evangelical leaders [have] a sense that the Johnson Amendment just isn’t really an issue anymore, and that they can go ahead and campaign for or against candidates or positions from the pulpit,” David Brockman, a scholar in religion and public policy at the Baker Institute for Public Policy at Rice University, told the joint investigation.

The article cites plenty of evidence. Six days before a runoff election in Frisco, a Dallas suburb, Brandon Burden, the pastor of  KingdomLife Church, told parishioners, “I got a candidate that God wants to win. I got a mayor that God wants to unseat. God wants to undo. God wants to shift the balance of power in our city. And I have jurisdiction over that this morning.”

The article also cites examples of ministers in Alaska, California, and New Mexico calling for the election of preferred candidates or the defeat of “demonic” candidates (i.e., Democrats).

The IRS refused to provide any details about ongoing investigations it may have underway. But its track record makes it clear that not a lot–if anything–is happening. The last investigation that the article can dredge up is from 2004 when the pastor of an Episcopal church in California gave an anti-war sermon. The pastor didn’t endorse a candidate but criticized the war, which was being led by incumbent George W. Bush.

That audit did not result in revoking the church’s tax-exempt status. The only time that happened was in 1992, when a New York church ran full page ads in newspapers, including The New York Times, under the heading “Christian Beware,” warning voters not to vote for Bill Clinton.

Of course, that’s mild compared to what churches do these days. Increasingly, conservative churches are political movements, not spiritual ones. Indeed, there is evidence that it’s not religion that drives people’s political views. Instead, it’s politics that drives people’s religious views. People are more likely to identify as evangelical if they are Trump followers, even if they didn’t identify as evangelical before Trump.

Meanwhile, anti-LGBTQ groups are taking advantage of the IRS’s hands-off attitude to hide their finances. Family Research Council and Focus on the Family are among 40 organizations that have classified themselves as churches, despite having virtually none of the usual characteristics of churches. But in doing so, they don’t have to file forms that disclose financial information, so no one knows how they spend their money.

The groups can do this knowing that the IRS will never come after them. In large part, that’s because the groups’ allies in the GOP have done their best to eviscerate the IRS, starving it of money and staff needed to audit tax returns and upgrade its systems. The former helps protect wealthy cheaters, er, donors, while the latter helps fuel popular discontent with the agency, thus making it easier to attack even more.

Meanwhile, the emboldened churches fuel the growing movement toward Christian nationalism. A majority of Republican voters would like officially to declare the U.S. a Christian nation, and candidates like Pennsylvania gubernatorial nominee Doug Mastriano have volubly called for reshaping the U.S. in the vision of the conservative evangelical minority, with all the attacks on LGBTQ rights that implies.

The separation between church and state has been eroding for so long that the effective demise of the Johnson Amendment is only the latest example. But it’s another sign that the walls in place to protect our rights are crumbling. It used to be when someone like Rep. Lauren Boebert said churches should be allowed to “direct the government,” you could dismiss it as crazy talk. Now, not so much.

School board forbids teachers from teaching kids how to eat poop