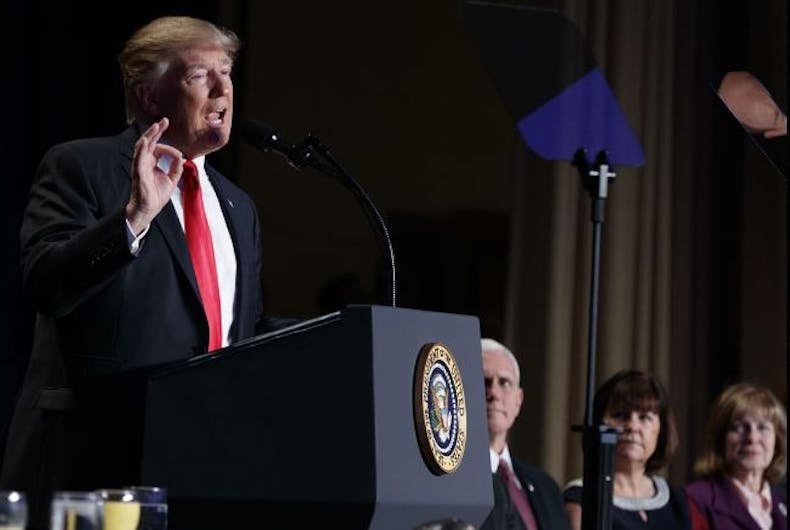 President Trump promised to “totally destroy the Johnson Amendment,” preventing churches from endorsing candidates, during his speech at the National Prayer Breakfast back in February, and House Republicans may help him make that a reality.

According to aides, repeal of the “Johnson Amendment” is being written into tax legislation developed in the House of Representatives, the Washington Post reports.

Trump tried to package the Johnson Amendment as suppressing “religious freedom,” despite the fact that preachers are allowed to speak about political and social issues. The Johnson Amendment, which became law in 1954, simply states that 501(c)(3) organizations, such as churches, charities, and universities, risk losing their tax exempt status if they intervene in partisan politics in such a way that helps or hurts a candidate or political party.

As the Post rightly notes, including a repeal in tax legislation would give it a better chance of passing than if it were to face a challenge as a standalone bill, where it would “almost certainly face a filibuster in the Senate, where opponents fear the measure would effectively turn churches into super PACs.”

But this strategy could backfire, putting an unnecessary hurdle in the way of passage of the tax reform bill. Tax reform is a major campaign promise and policy goal, and following the failure of the healthcare initiative a loss here would be embarrassing.

“Republicans are going to have enough problems getting tax reform done,” said Jim Manley, a longtime aide to former Senate minority leader Harry M. Reid, told the Post. “If they start loading it up with unrelated stuff like this one to score political points, it will just get bogged down and go nowhere.”

“A repeal would undermine the sanctity of our religious institutions, increase the flow of dark money in politics and force taxpayers to foot the bill for special interests,”  Sen. Ron Wyden, the ranking Democrat on the Senate Finance Committee said in a statement on Thursday.

White House spokeswoman Natalie Strom confirmed that Trump still supports repeal of the Johnson Amendment, but she would not comment further in terms of getting that promise met.

Ralph Reed, chairman of the Faith and Freedom Coalition, is pushing for the repeal and said the group supports working it into the tax bill if necessary.

“That would be fine with us, if it were to become law as part of a tax package,” Reed said. “We’d like to have an up-or-down vote, but this might make it easier to pass.”

Thief steals church’s rainbow flag, replaces it with a different one