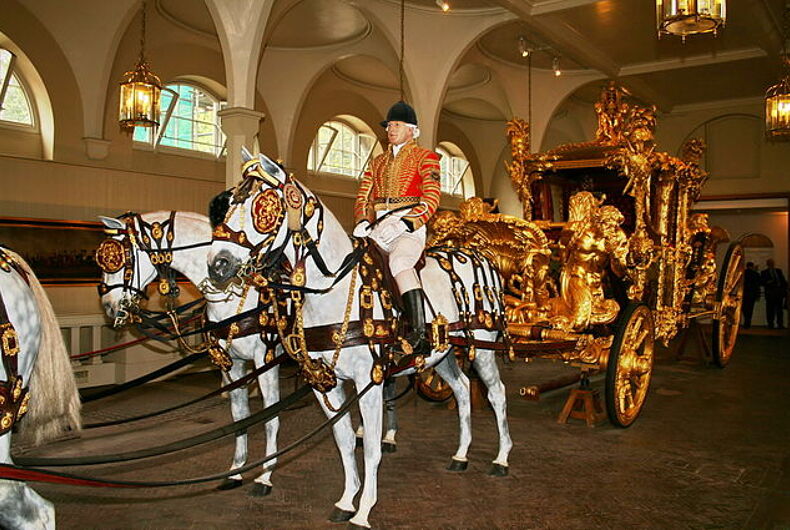 President Donald Trump will meet with Queen Elizabeth II in October, and sources tell The Times that the White House has made it clear that it expects he will be brought to the meeting in a golden coach, no matter the cost.

President Obama waved the formality, instead choosing to arrive in an armored motorcade to spare the expense and effort required for the less gold-plated means of transport when he met with the queen in 2011.

Trump wouldn’t be the first to take the journey from Horse Guards Parade to Buckingham Palace in the horse drawn carriage. Mexican President Peña Nieto, Russian President Vladimir Putin, and and Chinese President Xi Jinping have all ridden in a carriage. Putin even opted for the less secure open carriage.

Security sources say the precautions needed to keep Trump safe were already expected to be notable, with tens of thousands of people expected to show up to protest.

A source explained to The Times why the carriage is such a worse option for protection compared to going for an armed motorcade.

“The vehicle which carries the President of the United States is a spectacular vehicle,” the source said. “It is designed to withstand a massive attack like a low-level rocket grenade. If he’s in that vehicle he is incredibly well protected and on top of that it can travel at enormous speed. If he is in a golden coach being dragged up the Mall by a couple of horses, the risk factor is dramatically increased.”

The source went on to call the bulletproof glass in the gold carriage “flimsy.”

Hundreds of Secret Services agents, as well as both uniformed and plain clothes officers, will follow Trump along the route, as well as a counter-terrorism firearms unit.