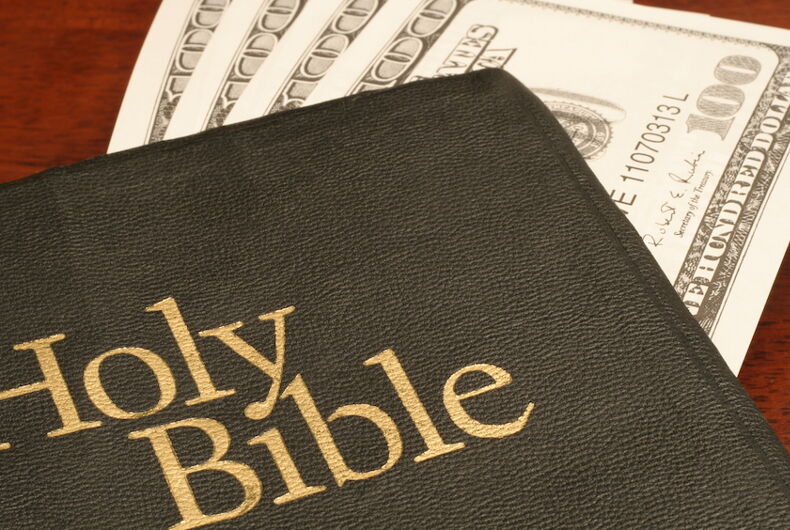 Increasingly, religious right organizations that don’t resemble a church in any sense are declaring themselves to be just that. The reasoning is simple: by doing so, they no longer have to file publicly accessible documents detailing how they spend their money and how much they pay their leaders.

According to Ministry Watch, an independent group that monitors Christian charities, “more tax-exempt organizations that clearly are not churches are claiming the church exception. These organizations are using this exception to keep not only the government, but also donors, from seeing how their money is being spent.”

In the past, evangelical groups have usually designated themselves non-profits. Under IRS laws, nonprofits have to file a form, available to the public, every year that lists how much the group spends on its stated mission, as well as administrative and fundraising costs. Nonprofits also have to reveal its board members, major donors, and the salaries of key employees.

But churches don’t have to reveal any of those things to the public. They can just rake the money in and spend it however they choose.

The organizations cite a variety of reasons for the move – one is potential harassment of donors, another is that filling out the IRS form becomes an administrative burden. Being a church also provides added protection from “government interference” – but an uncited benefit is that the public no longer knows about the often lavish salaries of the group’s leaders. According to the Washington Post, 2015 filings suggest that Franklin Graham was pulling about $800,000 between Samaritans Purse, his charity group, and the aforementioned association named after his father.

Now, thanks to the change, all we know about Graham’s salary is that he earned $700,000 from Samaritan’s Purse. How much he’s made from the other group is a secret.

By any definition – including the IRS’s – none of these groups is a church. The IRS says that a church has to have a specific place of worship, services, ordained ministers, and regular congregations. Working in an office park 9 to 5 on weekdays doesn’t meet those qualifications.

Of course, the Trump administration is hardly about to crack down on the sketchy behaviors of its core supporters – because theoretically, as ‘churches’, these organizations have to refrain form endorsing political candidates. Instead, the President has made a big deal about promising to remove that restriction for churches. If religious right groups want to flout the law, Trump isn’t about to let the IRS stop them.

Just to show how ascendant the religious right is in the GOP, between 2008 and 2011, Republican Sen. Charles Grassley investigated six televangelists for hiding their (enormous) salaries. Among them was Paula White.

White is now Trump’s personal religious advisor. Her office is in the White House.