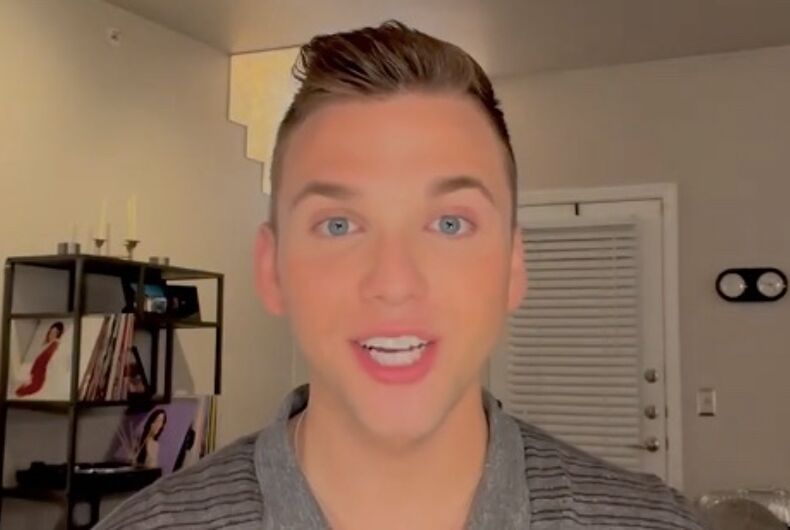 Andrew Hartzler, the gay nephew of anti-LGBTQ+ Rep. Vicky Hartzler (R-Miss.), smiled while talking about his aunt’s tears over a same-sex marriage bill.

“Today the United States Congresswoman, my aunt Vicki, started crying because gay people like me can get married,” the young man said in a TikTok video, referencing Rep. Hartzler’s teary-eyed speech yesterday on the House floor.

In her speech, Hartzler said that the Respect for Marriage Act (RFMA), a new law that requires the federal and state governments to recognize legal same-sex marriages, will endanger people and institutions of faith.

She choked up with tears while saying, “I hope and pray that my colleagues will find the courage to join me in opposing this misguided and this dangerous bill.”

Her nephew said that, despite coming out to her this past February, “She’s still just as much [of] a homophobe.”

He also contradicted her claims about religious groups being silenced by the RFMA.

“Institutions of faith, like religious universities, are not being silenced,” he said. “They’re being empowered by the U.S. government to discriminate against tens of thousands of LGBTQ students because of religious exemptions. But they still receive federal funding.”

The young man is correct. In fact, in December 2021, the conservative-leaning U.S. Supreme Court ruled that taxpayers have to fund anti-LGBTQ+ religious schools.  An estimated 100,000 LGBTQ+ students attend over 200 religious colleges and universities that use such exemptions to receive federal funding despite anti-LGBTQ+ practices that constitute sex discrimination.

In fact, Andrew Hartzler, who was raised in a deeply conservative Christian environment, attended Oral Roberts University, a school that can expel students for being gay.

During his time at the school, he was accused of violating the school’s honor code for having his boyfriend in his dorm room. School officials required him to attend an “accountability meeting” where a staff member lectured him about being a man of God.

Three months after graduation from the university, he joined a class-action lawsuit against the Department of Education, asking the court to strike down Title IX religious exemptions as a violation of the Establishment Clause of the First Amendment and of the students’ equal protection rights, Politico reported.

Speaking directly to his aunt in the video, Andrew Hartzler said, “It’s more like you want the power to force your religious beliefs on to everyone else. And because you don’t have that power, you feel like you’re being silenced — but you’re not.”

“You’re just gonna have to learn to coexist with all of us,” he said while smiling into the camera. “And I’m sure it’s not that hard.”

So the congresswoman who was crying about gay marriage has a gay nephew!! pic.twitter.com/I0cazMofdn