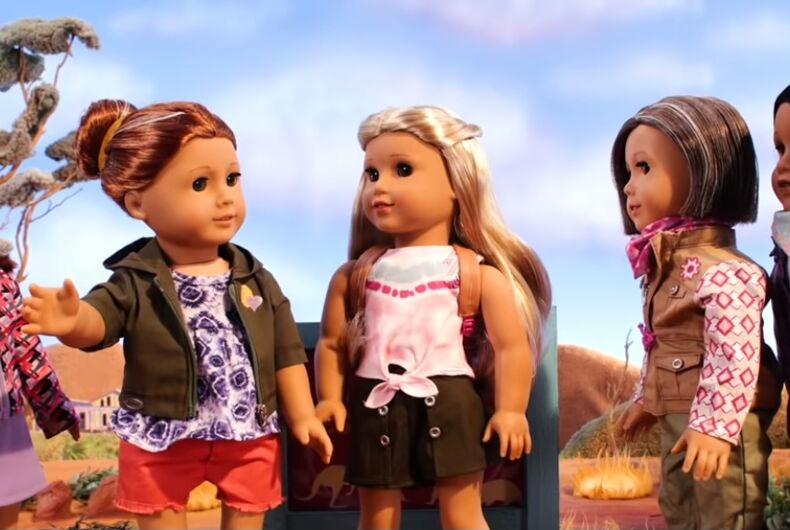 Transphobes are worried that a children’s book is encouraging three-year-olds to get on puberty blockers.

The outrage du jour is A Smart Girl’s Guide: Body Image, a book released by American Girl, a company that makes a diverse range of dolls for children. Fox News and others have claimed that the book “pushes” children to seek a medically assisted gender transition.

The book does this, apparently, by encouraging young people to explore their gender expression and talk to adults and doctors if they think they’re transgender or nonbinary.

“The way you show your gender to the world through clothes and behavior is your gender expression,” the book says, adding that young people can experiment with different clothes and hairstyles.

When the book mentions trans issues, it states, “Being transgender is not an illness or something to be ashamed of. If you’re questioning your gender identity — or if you already know for sure that you’re trans or nonbinary — talk with an adult you trust like a parent or school counselor. That person can connect you with a specially trained doctor, who can help you and your family decide what’s best for your body.”

“If you haven’t gone through puberty yet, the doctor might offer medicine to delay your body’s changes, giving you more time to think about your gender identity,” the book adds.

The book says that doctors may suggest wearing clothes and using pronouns that “make you feel most like the true you.” It mentions that studies show that medical support improves the mental health of trans and nonbinary youth, and also offers a page of national resources for young people who don’t have adults they can trust.

The Christian Broadcasting Network wrote that the book “promotes gender transition [and] puberty blockers to girls as young as 3.”

Amazon says the book is for children ages 8 to 11, the American Girl website says it’s for ages 10 and up, and most three-year-olds aren’t trying to stop the onset of puberty. In fact, most kids can’t even read until they’re six or seven years old, and the long paragraphs in the book are probably intended for older readers.

One Twitter commenter, @polishprincessh, wrote that the book “teaches girls how to change their sex… making permanent changes to their bodies & going behind parents backs to get help.”

She apparently disapproves of children learning about their identities without their parents’ express permission. Also, the book doesn’t teach kids how to make “permanent changes to their bodies” because it doesn’t mention surgery. Puberty blockers don’t cause permanent bodily changes.

It teaches girls how to change their sex by seeking puberty blockers, making permanent changes to their bodies & going behind parents backs to get help. pic.twitter.com/QkBc9fl2kJ

Allie Beth Stuckey, an anti-trans Christian conservative commentator, has claimed on YouTube that the book is “pushing sterility and destruction.”

“Now [American Girl is] encouraging our daughters to hate their bodies, halt their puberty, & cut off their breasts in the name of ‘self-love,’” Stuckey wrote on Twitter.

Nowhere does the book encourage people to “hate their bodies” or “cut off their breasts.” Stuckey is merely repeating transphobic extremist misinformation about gender-affirming doctors “mutilating” children.

Gone are the days when @American_Girl taught girls about history & femininity. Now they’re encouraging our daughters to hate their bodies, halt their puberty, & cut off their breasts in the name of “self-love.” Return your AG Christmas gifts asap. https://t.co/eqiVnG9m9z

“This lunacy is poisoning everything and the only way out is by sending a message to these companies by draining them of money,” he wrote on Facebook. “Make them feel the weight of their decision to indoctrinate kids with this dangerous ideology.”

These right-wing responses are unlikely to deter American Girl from changing its book because the company has demonstrated enthusiastic support for LGBTQ+ children. Its Smart Girl’s Guide to Crushes includes advice for young lesbians and bi girls. One of its playsets included a Pride-flag-studded EQUALITY sticker.

Kira, the 2021 Girl of the Year doll, came with a novel detailing a trip to her married aunts’ wildlife sanctuary. When the anti-gay organization One Million Moms complained about Kira’s aunts, American Girl defended the characters.

You know the Golden Rule. But what about the Platinum Rule?