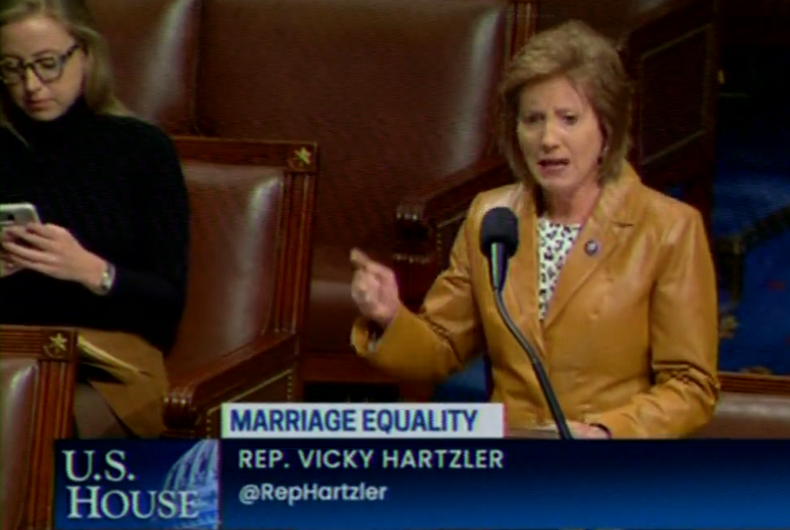 Marriage can be an emotional affair, but Rep. Vicky Hartzler (R-MO) is taking it to another level.

This morning, the House of Representatives voted to pass the Respect for Marriage Act (RFMA) in a 258-169 vote, sending the bill to President Joe Biden, who is expected to sign it.

But not before some floor speeches on the bill.

“I’ll tell you my priority,” Hartzler said. “Protect religious liberty, protect people of faith, and protect Americans who believe in the true meaning of marriage!”

Nothing in the bill forces anyone to get married to someone of the same sex or forces a church to conduct a marriage for a same-sex couple. The entire reason the House voted on it this morning after having already passed it in July was that the Senate amended it to add religious freedom language specifying that this bill doesn’t require any religious organization to provide “any services, facilities, or goods for the solemnization or celebration of a marriage.”

But that didn’t stop Hartzler from blubbering.

“I hope and pray that my colleagues,” she said, pausing as she choked up, “will find the courage to join me in opposing this misguided and this dangerous bill.”

Holy shit. A Republican just started crying on the floor of Congress begging them to vote against protecting marriage equality. pic.twitter.com/8l2n2epuQP

She did not appear to inspire much sympathy online.

I want someone to ask these folks just how same sex marriage impacts their marriage.

No one can judge you like a "Christian" conservative!!! They supposedly follow Jesus – but refuse to leave the judging to God 🤔

Does she cry every time there’s a divorce, and gets remarried many times over as well? “Protecting religious freedoms” no one is stopping those of faiths from practicing what they believe, though her faith is trying to stop others in their beliefs.

Ummm….how many of her "colleagues" have had multiple marriages and divorces? Or extramarital affairs? Give me a break. This is just plain old religious bigotry and hypocrisy.

OMG! How does my marriage to my husband affect you? It doesn't! I've been with my husband 39 years. Can everyone one of you opposing this say the same thing? I bet not!

She is the misguided one. She has the religious freedom to marry someone of the opposite sex. But she doesn’t get to dictate her so-called “TRUE meaning of marriage” on anyone else’s freedom. Don’t like it, sweetie? Don’t marry a woman. It’s simple. Hate never wins.

Because she realizes 70% of Americans support same-sex marriage, and that number will only increase as time goes on.

Just a reminder that religion is not a loophole for bigotry.

Hartzler has been in Congress since she won her first election in 2010. She chose not to run again this year, instead entering the Republican primary for a U.S. Senate seat in Missouri. She lost that primary to Eric Schmitt.

Missouri’s Fourth Congressional District will be represented by Republican Mark Alford next year.