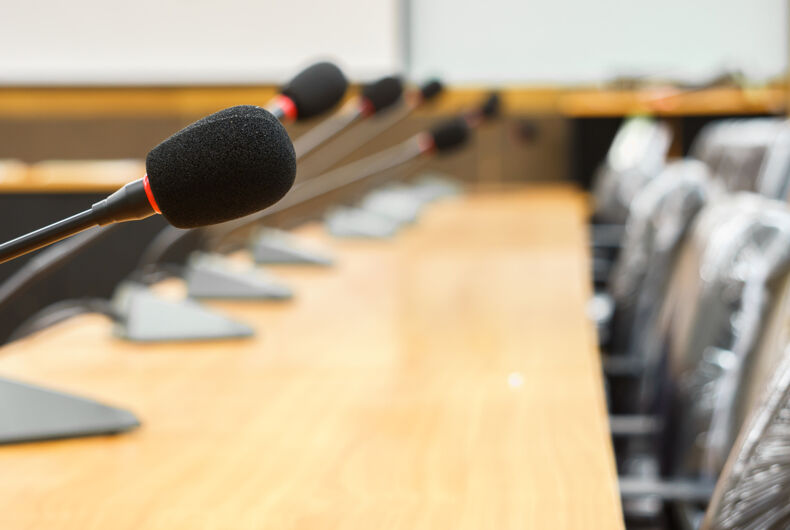 A transgender member of the Asheville City Board of Education has resigned after a months-long campaign of harassment by a representative of a national hate group.

Peyton O’Conner announced her resignation from the board on Monday night, effective immediately.

Ronald Gates, a self-described pastor and “ambassador” for the Arizona-based hate group Alliance Defending Freedom, started showing up at Asheville City Board of Education meetings in October, hectoring the board with anti-LGBTQ+ rhetoric, denouncing critical race theory, and misgendering board member O’Conner.

“Mr. Gates is a fascist whose hatred and fear-mongering have no place within the Asheville City School’s community,” O’Conner wrote in her letter of resignation to the board. “He is dragging a well-funded group of fascists into our town in order to claim his own 15 minutes of fame. His views are ignorant, disgusting, and vile.”

O’Conner was appointed to the seat in March 2021 by the Asheville City Council to fill a term ending in 2024.

O’Conner’s resignation follows a board meeting at which she ripped up a letter transmitted by Gates that demanded “parents, school board members, and local clergy be informed if teachers plan to allow ‘indoctrination teaching’ in the school system.”

Alliance Defending Freedom identifies itself as a “legal organization committed to protecting religious freedom, free speech, the sanctity of life, parental rights, and God’s design for marriage and family.” The Southern Poverty Law Center describes it as a “hate group.” ADF has joined with like-minded organizations in Europe in support of forced sterilization of transgender individuals.

When Gates took the mic for public comment, he repeatedly misgendered O’Conner, despite rebukes from the board chair. O’Conner interjected: “Mr. Gates, I would ask that you refrain from bigotry and hate speech. That is not my gender.”

Gates went on: “We should be focusing on reading, writing, math, and history, true history, instead of sexual immorality or indoctrination or CRT. As I shared, the submittal of the information, it was submitted before the board, respectfully, and the individual that took time to rip up that information is not known, as you reflect it, as ‘Miss.’ I will say ‘Mr.’ if the blood was drawn XY, which is a male.”

Board members can be heard repeating “no,” and Gates is gaveled out of order and told to yield his time. The pastor and his supporters were escorted from the room by security, as Gates continued his rant.

“The ADF has a playbook,” O’Conner wrote in her resignation letter. “Essentially, Mr. Gates will continue attacking until he is censured in a way that allows him (with the assistance of the ADF) to create a lawsuit and turn our district into the circus and s**t show that he and the ADF desire. This isn’t a guess, the ADF makes no attempt to hide its tactics. It’s a group with 1.6 million followers, they are looking for their next opportunity for their next Fox News press blitz.”

Asheville is one of the most progressive cities in the southeast. According to the last U.S. Census, the Asheville area has 83% more LGBTQ+ people than the typical American city or town. In 2021, the city council unanimously passed one of the country’s most sweeping anti-discrimination ordinances, protecting residents based on sex, age, sexual orientation, gender identity or expression, and several other classes.

Elliot Page looks studly on the cover of his upcoming memoir