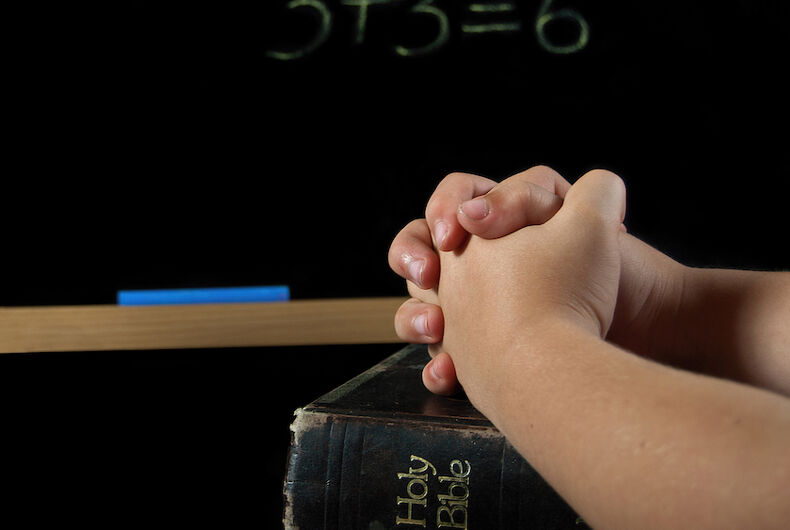 Thanks to Donald Trump, the Supreme Court has taken a hard turn to the right. At least five of the justices are ready to overturn a woman’s right to choose, and two of the justices have already said that they would like to overturn marriage equality.

Now, in what is yet another salvo into the culture wars, the Court looks like its about to strike down laws forbidding states from funding religious schools. Such a ruling would be a disastrous erosion of the separation of church and state and would giving taxpayer money to schools with an explicitly anti-LGBTQ agenda.

The case at hand, Carson v. Makin, involves a Maine law which allows the state to pay nonsectarian private schools to educate students in rural areas where there are no public high schools. The state won’t pay private religious schools to perform the same task, however.

In arguments before the Court this week, all six of the conservative justices signaled that they think the Maine law should be struck down as unfair to religious schools. (Not surprisingly, five of those justices attended private religious schools.)

The case before the court revolves around two Christian families, both of whom objected to not getting state funding to send their children to two conservative Christian schools that Justice Elena Kalgan described as “proudly discriminatory.”

That’s an understatement. The schools won’t admit gay or trans students or hire gay teachers. One of the schools teaches students that a “husband is the leader of the household” and has a class to “refute the teachings of the Islamic religion with the truth of God’s Word.”

Justice Stephen Breyer pointed out that the funding private religious schools would conflict with Maine’s non-discrimination laws. “No gay students, no gay teachers, the man is superior to the woman, and a few other things like that,” he pointed out.

Of course, from the right’s point of view, that kind of extreme is a feature, not a bug. The whole point of many religious schools is to create a parallel universe where being LGBTQ is a sin, and non-discrimination laws are a kind of moral failure.

Striking down Maine’s law—and, by extension, laws in every other state forbidding state funding of private religious schools—would be a huge blow to the concept that church and state should be kept separate.

Moreover, the decision would make it clear that expressions of faith supersede any other right. From this perspective, making people adhere to laws prohibiting discrimination are themselves discriminatory, but only when it applies to religion.

The Court is paving the way for a country where religion—and specifically conservative Christianity—is the lens through which the law must be viewed. You can’t be neutral about religion, which had been the legal standard up until recent years. If you don’t positively protect it and embrace it, you aren’t adhering to the law.

Clearly, this is a really bad sign for LGBTQ rights. Just as much of the reasoning for extending LGBTQ rights depends upon the same legal arguments that uphold a woman’s right to choose, they also rely a lot upon the separation of church and state.

But now the Supreme Court is ready to strike that down as well. Soon, your tax dollars will be spent educating future generations to hate you.

Another Duggar sibling is facing criminal charges for offenses against children