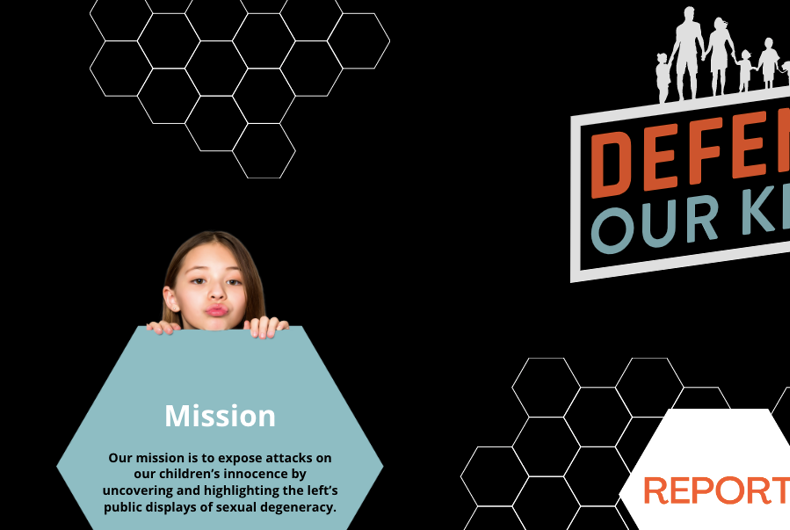 Texas Family Project — an anti-LGBTQ organization that wants to stop “the Left” from “indoctrinating kids,” “confusing children about changing their gender,” and “undermining parents’ ability to protect their children’s innocence” — has launched Defend Our Kids Texas, a website where people can report live drag queen performances.

“Our mission is to expose attacks on our children’s innocence by uncovering and highlighting the left’s public displays of sexual degeneracy,” the website reads.

The site’s lead face is Sara Gonzalez, a host for the conservative broadcast Blaze TV. Gonzales has called drag performers “pedophiles,” directed her social media followers to shut down drag performances in the state, and lied about performances just to whip up public outrage against them.

“Gonzales is teaming up with Texas Family Project… to expose the depravity of the left and fight for sound public policy to Defend Texas Kids,” the site proclaims.

The site uses right-wing rhetoric characterizing drag shows as an effort to “sexualize children” or “groom” them for rape. Even the site’s name is provocative, as the only reason Texas parents would need to “defend” their kids would be if someone were threatening their safety.

Such claims of drag queens “threatening” kids have led armed protestors and violent threats to be deployed against venues hosting all-ages drag shows as well as against bookstores, libraries, and other venues hosting drag queen story hours. The rhetoric is especially concerning since a mass shooter recently killed five and injured 18 while attacking a Colorado Springs drag bar.

While appearing last month on the show of bigoted Fox News host Tucker Carlson, Gonzales called drag events a form of “child abuse.” She also shared a video of a drag performance in Texas where a queen lip-synched to a song with explicit sexual lyrics. Gonzales claimed the event was all-ages, but she lied.

According to Raw Story, the venue advertised the event online with a disclaimer stating, “If you would not allow your children to see a rated R movie or watch TV-MA programming, this is not the event for them.”

During her appearance on his show, Carlson said that drag shows are “sexualizing children” and are “a huge moral crime that nobody should accept.”

Gonzales and another similar group, Protect Texas Kids, recently encouraged people to protest a transgender story time at Patchouli Joe’s, a bookstore in the university town of Denton, Texas. The bookstore hosted a transgender individual who read three children’s books about gender to commemorate the last day of National Transgender Awareness Week.

Protect Texas Kids encouraged its followers to “protest against this disgusting attempt to normalize and celebrate… something that leaves kids physically disfigured, sterilized, and traumatized for the rest of their lives.” It also called the event “abusive.”

Protect Texas Kids and Defend Our Kids Texas’ rhetoric echoes right-wing disinformation about gender-affirming medical care for trans youth. Indeed, Texas Republicans have tried to have gender-affirming care criminalized as a form of “child abuse.” The claim opposes the advice of the country’s largest medical associations, has resulted in trans-affirming families fleeing the state, and disrupted the work of the state’s child abuse prevention agency.

During the event, Gonzales stalked the bookstore’s aisles, recording video of the storytime. When a security officer kicked her out, she continued recording and screamed to the audience, “This is child abuse! Child abuse! You should all have your children taken from you.”

The event was also attended by Blaze TV contributor Alex Stein, a self-styled “troll” “comedian” who sexually harassed women like Rep. Alexandria Ocasio-Cortez (D-NY) and a female Vice News correspondent. Stein has protested drag events in the state before.

Two days after the event, Stein attended a Denton city council meeting and screamed about the bookstore “indoctrinating children to become transgender.”

Editor’s note: A previous version of this story incorrectly stated which group encouraged its followers to protest the transgender book reading event in Denton, Texas.