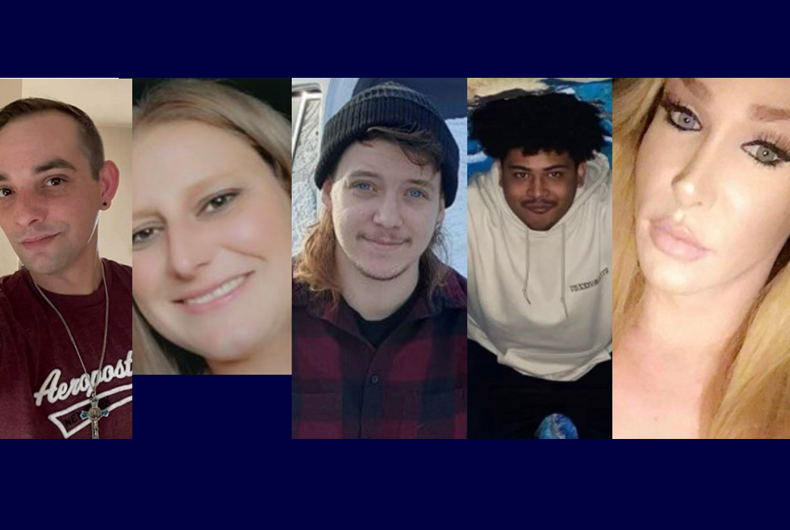 A mother, a role model, a “one-of-a-kind,” a good listener, and a self-proclaimed “Master of Silly Business.”

These were the five people killed at the LGBTQ bar Club Q on Saturday night, the eve of the Transgender Day of Remembrance, when a gunman opened fire on what has been described as the “only safe space” in Colorado Springs, Colorado for the LGBTQ community.

While the suspected shooter is in custody, much remains unknown about the motivations behind this vicious attack.

What we do know is that these five people were deeply loved. Their friends and families have described them as kind, supportive, loving, and caring people whose absences have ripped apart the lives of so many.

Here are the five victims we must never forget.

Saturday was 22-year-old Raymond Green Vance’s first time at Club Q. He was out with friends, his girlfriend, and her parents.

A statement from Vance’s family called him “a kind, selfless young adult” who loved to help other people and said “his closest friend describes him as gifted, one-of-a-kind, and willing to go out of his way to help anyone.”

Vance was working at FedEx and “couldn’t wait to save enough money to get into his own apartment.”

“Raymond grew up surrounded by cousins whom he was very close with,” the statement said, “and they and the rest of his tight-knit family are still trying to come to terms with the fact he is gone. His absence will leave irreparable heartbreak in countless lives.”

Vance was reportedly passionate about video games and even thought about playing professionally. He had been with his girlfriend, Kassandra Fierro, since middle school.

Kassandra’s father, Richard Fierro — a straight, 15-year Iraq and Afghanistan military veteran — is being called a hero after he tackled the gunman and beat him with his own handgun.

Kelly Loving, 40, was a Denver trans woman who was visiting friends in Colorado Springs that night.

“She was loving, always trying to help the next person out, instead of thinking of herself,” her sister, Tiffany Loving, told the New York Times. “She was just a caring person. I was really close with her.”

Twenty-five-year-old Natalee Skye Bingham knew Loving for seven years and said she had been like a mother to her during her transition.

“She reminded me that you are not doing the wrong thing by being trans,” Bingham said, “that it was OK to embrace it because you are a beautiful person. Without her giving me the confidence, I don’t know where I would be today.”

Bingham said Loving was no stranger to anti-trans violence but that she was a “fighter.”

When the shooting began, Bingham had just hung up from a FaceTime call with Loving, during which she had been showing off her outfit.

“It was so relieving to know that she felt beautiful that night,” Bingham said.

Ashley Paugh, 35, was the mother of an 11-year-old daughter.

“Nothing will ever be the same without her,” her sister, Stephanie Clark told NBC News.  “Right now, I don’t want to laugh. She was a loving, caring person who would do anything for anybody. We’re gonna miss her so much.”

Paugh was not a member of the LGBTQ community but was visiting Colorado Springs with a friend and had gone to Club Q to see a comedian perform.

Her husband Kurt said she had a “huge heart” and worked with an organization that helped foster kids find homes.

Derrick Rump, 38, was a bartender at Club Q. He was described by friend Anthony Jaramillo as “loving, supportive, with a heavy hand in his drink pouring, and just a really good listener.”

Jaramillo told CBS News that Rump “would not be afraid to tell you when you were wrong instead of telling you what you wanted to hear and that was really valuable.”

Tiara Latrice Kelley, a Club Q performer, told The Gazette that Rump was “all about keeping people happy.”

His brother-in-law, Michael Kissling, spoke to WFMZ about how he had moved to Colorado Springs a little over ten years ago to “live out his dreams, start a new life, just to see what’s out there, do what makes him happy.”

And according to Rump’s sister, Julia Kissling,  it seems he succeeded.

“He found a community of people that he loved really much, and he felt that he could shine there, and he did. He made a difference in so many people’s lives, and that’s where he wanted to be.”

Rump’s brother also passed away just a few months ago.

Daniel Aston, 28, was also a Club Q bartender. He was a trans man who had moved to Colorado Springs to be near his parents.

His mom, Sabrina Aston told Colorado Public Radio that once he began working at Club Q and building his Colorado Springs community, he was “the happiest he had ever been.”

“He was thriving and having fun and having friends. It’s just unbelievable. He had so much more life to give to us and to all his friends and to himself.”

Aston reportedly described himself as the “Master of Silly Business” who loved to perform at the bar.

Sabrina Aston told the AP that he spent his childhood trying to make people laugh, loved wearing elaborate costumes, and even wrote plays that he and his friends would act out.